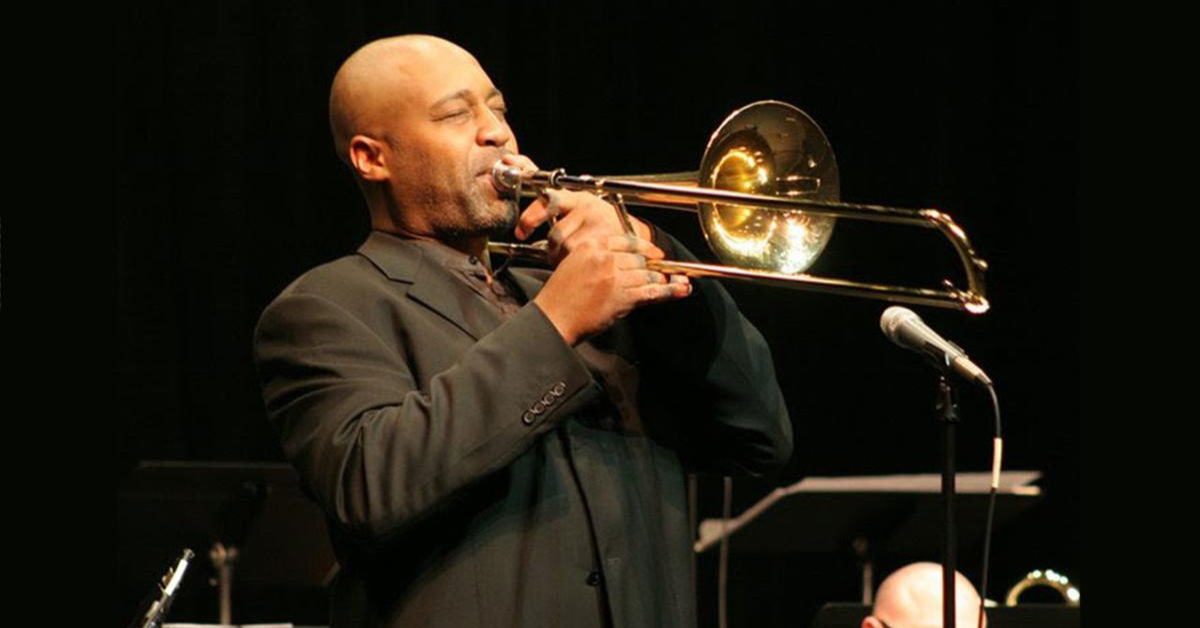 Advance tickets on sale now. Save up to 30% on your tickets by getting a discount package of 3+ Festival concerts. Subject to availability, $12 Student Rush (with student ID), $30 General Admission, and $55 Premium tickets may be purchased at the box office on the evening of the concert. The box office will open at 6:30 PM that day. If you prefer to watch online, please select a virtual ticket. Virtual tickets are available on a sliding scale and provide on-demand access starting the Monday after the concert until the end of July.

Program order to be announced from the stage

Andre Hayward is a gifted trombonist with the sound and clarity reminiscent of the late J.J. Johnson. Born in Houston in 1973, Hayward’s first exposure to music was through his parents, Melvin and Barbara Hayward. He began playing trombone and tuba at the age of 11. He attended HSPVA, and continued to hone his skills with Houston’s legendary educator Conrad O. Johnson. He has recorded or performed with Betty Carter, Joe Williams, John Lewis, Kirk Whalum, The Duke Ellington Orchestra and many others. Hayward toured as lead trombonist with The Jazz at Lincoln Center Orchestra and the Duke Ellington Orchestra.

Gene Centeno is a professional saxophonist and music educator. He obtained his Bachelors in Jazz Saxophone Performance from Texas State University. He has performed and recorded with many artists locally and nationally, such as, Grupo Fantasma, The Latin Players, Andre Hayward, Greg Boyer, The Temptations, Prince, Maceo Parker, Sheila E and many others. Originally from San Antonio, Tx, he enjoys calling Austin, Tx home since 2014. He takes part in Austin’s rich musical environment and is proud to be a Graduate Jazz Student and TA at the University of Texas at Austin, Butler School of Music.

Edward W. Hardy is a critically acclaimed Black and Puerto Rican composer, music director, virtuoso violinist and violist and is one of the foremost exponents of solo violin repertoire for theatrical productions. As the composer, music director and violinist of the smash hit Off-Broadway show The Woodsman Hardy’s show was a recipient of the 2016 Obie Award and the 2014 Jim Henson Foundation Grant. Wolf Trap Foundation for the Performing Arts commissioned Edward’s song cycle, BORN FREE (Sorrow Home, Lineage, The Struggle Staggers Us, and Southern Song) and premiered the work as part of their 2022 UNTRAPPED series.

Edward has received numerous awards, most recently winning 1st Prize in the 2022 University of Northern Colorado Concerto Competition and 2nd Prize in the 2022 Angie Southard Performance Competition. Edward is a proud member of Local 802 Musicians Union, Dramatist Guild of America, ASCAP and is affiliated with the Sphinx Organization, Exploring the Metropolis, and the Gateways Music Festival. He is also the founder and artistic director of the Omnipresent Music Festival – BIPOC Musicians Festival, and the digital marketing director and artistic advisor of Beethoven in the Rockies. Edward is a Doctoral candidate/ graduate teaching assistant in Violin Performance at the University of Northern Colorado under the mentorship of Dr. Jubal Fulks.

After receiving her Bachelor’s Degree with honors, Ilia studied privately with acclaimed cellist Martha Gerschefski in Atlanta, Georgia. In 2013, she received a Masters Degree in Cello Performance and Ethnomusicology from the University of North Texas. During her time at UNT, she studied with renowned cellist Eugene Osadchy, performed with the New Music ensemble Nova, held a position with the prestigious Center Stage Piano Trio/Quartet, and was awarded the Dean’s Scholarship. After relocating to Austin, Ilia became a teaching artist with Austin Soundwaves, where she initiated a cello choir known as Solo Celli. Some of her recording credits include Dominican songwriters Anthony Rios and Janio Lora; the Atlanta, GA based rock group Jungol; Austin jazz artists Laura Otero, Zack Varner, and Peggi Stern; and the ZACH’s Theater Productions soundtrack for Cenicienta. Ilia currently performs with several orchestras throughout Texas and holds a contract position with the Midland-Odessa Symphony.

Talented multi-instrumentalist and Cleveland native, Phillip K. Jones II, began playing music at a very early age. By the age of four, he had learned and mastered the drums and began to play them in church. By age eight, his father, Rev. Phillip Jones, Sr., introduced and taught Phillip, Jr. on the organ. At age 12, Phillip studied at the Cleveland Music Settlement for two years. While attending, he was the organist for Greater Faith Baptist Church. During this time he toured twice to Nice, France where he performed as a drummer.

Mr. Jones attended and graduated from Cleveland Heights High School. While there, he played for the school’s gospel choir and the jazz ensemble which earned him the privilege to perform with famed gospel recording artist Walter Hawkins. Phillip attended Hampton University before attending Cuyahoga Community College, where he studied with Rodney Hubbard, Joe Hunter, Jackie Warren, Drene Ivy, LaFayette Carthon, II among other notable players. In 2007 Phillip graduated from the Oberlin Conservatory of Music with a Bachelor of Music degree. During his tenure at Oberlin he had the opportunity to perform with famed songstress Babbie Mason, and recorded on Bill Ransom’s debut jazz CD “Generations.”

TerranceMcDaniel has been a fixture on the Austin music scene as a drummer, bandleader, and educator for over a decade. A jazzer at his core, McDaniel’s voice on the drums is shaded by the scenes his musical path has taken him through: Greasy Soul in Memphis, energetic Fusion, and Smooth Jazz in Dallas, and rootsy Blues and Country in Austin.