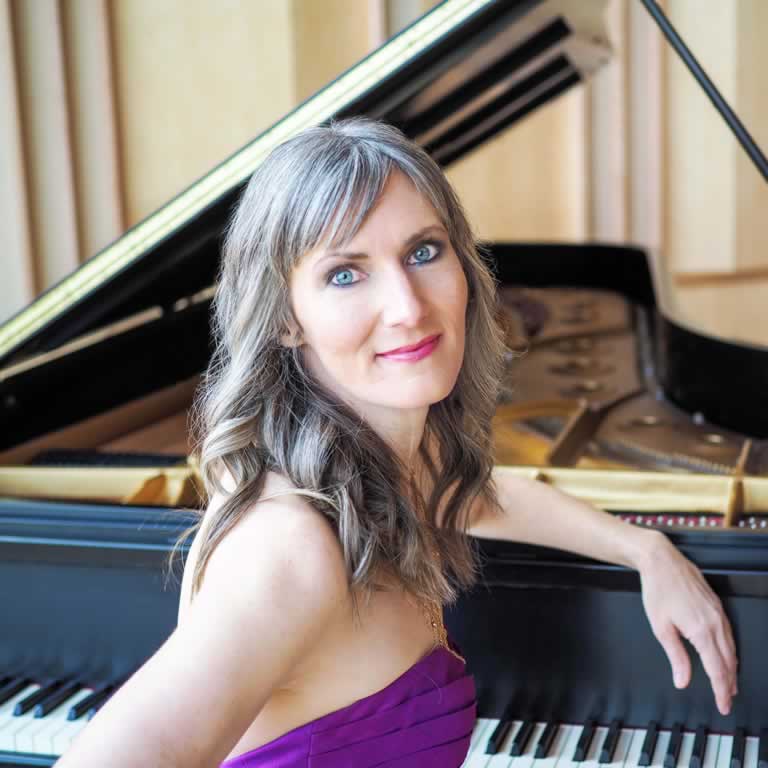 Hailed for her “sensitive, flexible, and tempestuous dexterity” (Fanfare Magazine), pianist Michelle Schumann has built a reputation for evocative and moving performances that are infused with unique energy and zeal. Winner of the 2006 Janice K. Hodges Competition for Contemporary Music, Schumann’s programs feature meticulously integrated selections of classic and contemporary repertoire producing performances that are “smart, irresistible, and utterly captivating” (Austin-American Statesman). Recent international performances have taken her to the City de la Musique-Paris, Conservatoire de Gabriel Faure, and Conservatoire de Maurice Ravel in France; Birmingham Conservatory and St. Mary’s Cathedral-Haxby in England; the Roxy Theatre in Edinburgh, Scotland; and the Salzburger Dom Cathedral and Konzervatorium Wien in Austria.

Michelle’s most irresistible qualities as a performer include her unabashed musical expression and her ability to connect with audiences. Her performance of Gershwin’s Rhapsody in Blue conducted by Peter Bay of the Austin Symphony was named the #1 Classical Arts Event of 2008 by the Austin Chronicle. Additional accolades include the 2017 award for Classical Music Ensemble; the 2009 award for “Best Instrumentalist;” and the 2006, 2007, and 2008 award for “Best Chamber Music Performance” given by the Austin Critics’ Table. While deeply steeped in the creative-cultural community of her hometown, Michelle has also been a featured performer at international festivals including the Edinburgh Fringe Festival, Ottawa Chamberfest, Ethos Contemporary Music Festival, San Angelo Piano Festival, Fayetteville Chamber Music Festival, International Festival Institute at Round Top, Long Beach Opera Festival, Bang-on-a-Can Summer Festival at the Massachusetts Museum of Modern Art, Banff Festival of Music and Sound, Snake River Chamber Music Festival, Victoria Bach Festival, Victoria International Festival, and Tanglewood.

Praised for her versatility, Schumann has helped to lead an eclectic array of projects demonstrating her commitment to unexpected creativity in collaboration. Project highlights include designing and performing the music for Ballet Austin’s “Truth and Beauty: The Bach Project” which featured solo piano music by J.S. Bach and Philip Glass and was later aired on the lauded PBS-KLRU program, “IN CONTEXT.” In addition to performing the solo piano program, Schumann also led a baroque ensemble from the harpsichord for Bach’s Orchestral Suite No.2. In 2010, Schumann served as music director, conductor, and pianist for Michael Nyman’s chamber opera The Man who Mistook his Wife for a Hat, in a collaboration with Austin Lyric Opera during the Austin Chamber Music Festival. In 2006 and 2008, Michelle’s pianism took to the dramatic stage in a staged production of Schubert’s Die Winterreise, directed by the Viennese Maverick producer Andreas Mitisek of the Long Beach Opera. Michelle has also been an enthusiastic proponent of the music of John Cage and has developed a cult-like following for her annual “Happy Birthday, Mr. Cage!” concert which she has been producing, performing, and directing since 2000. Highlights of the series includes a collaboration with film-collage artist Luke Savisky in an acclaimed rendering of Cage’s “Sonatas and Interludes for Prepared Piano;” and a co-production with the Austin Zen Center of Cage’s most meditative music, set for an encore presentation at the Brooklyn Zen Center in 2011.

Since 2006, Michelle has served as Artistic Director of the Austin Chamber Music Center, where she “is fearlessly expanding our definition of chamber music” (Austin-American Statesman). Following her ground-breaking first season with the Austin Chamber Music Center, she won multiple awards from the Austin Critics Table, including the coveted award for “ Body of Work/Season.” Praised for “her whip-smart sense of programming” (Austin-American Statesman), Schumann’s specialty is developing unexpectedly integrated and thought-provoking programs. Her brand of performance includes an enthusiastic interplay with the audience, with whom she shares surprising insights about the music, composers’ lifestyles, and the social context of music performed. Her trademark includes bringing diverse music together under a blanket of narrative, producing not simply concerts, but events.

Schumann is artist-in-residence and professor of piano at the University of Mary Hardin-Baylor where she is the founder and Artistic Director of the Hillman Visiting Artists Series. She received a Doctor of Musical Arts degree from The University of Texas at Austin and additionally holds a Young Artist Diploma from the Cleveland Institute of Music and a Performance Diploma from the Vienna Conservatory. Her principal teachers included Anton Nel, Gregory Allen, and Marilyn Engle with additional teaching mentors including Emmanuel Ax, Peter Serkin, Ursula Oppens, Anne Epperson, and James Dick.