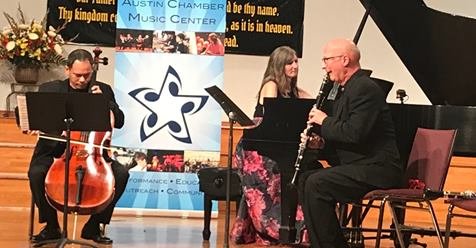 This past Saturday, I checked out Austin Chamber Music Center’s season opener, “Beauty on Water” at Northwest Hills United Methodist Church. It was first of a season dubbed Landscapes, in which each performance will highlight works from a different culture or country. This program featured the music of Scandinavian composers.

“Beauty on Water” included works from the Dane Emil Hartmann and Swedes Tor Aulin and Elfrida Andrée, as well as a work by Beethoven. All of the Scandinavian composers were new to me, and I really appreciated this exposure to a different culture.

I was particularly thrilled to meet Elfrida Andrée. Not only was her piece my favorite of the night, with a full, dramatic sound, but her life story turned out to be fascinating!

Throughout the evening, Michelle Schumann provided a brief commentary on each selection. Prior to Andrée’s Piano Trio No. 2 in G Minor, Schumann told the audience that Andrée had been a gifted organist in nineteenth century Sweden, where it was illegal for women to hold official organ posts in churches. Andrée and her family sued the government over this, and won. Andrée soon became organist at Gothenburg Cathedral, the most coveted organ post in the country. And as evidenced by Saturday’s performance, Andrée was also a gifted composer.

Landscapes runs through the end of April. Programs include Nostrovia, featuring Russian composers; It’s All Greek to Me East Meets West and The Melting Pot. Concerts are given twice, once on a Friday night in a private home, and then again on Saturday night at a public venue. The Friday concerts are sold out, but tickets remain for all Saturday performances. Prices for these run $25-$45.