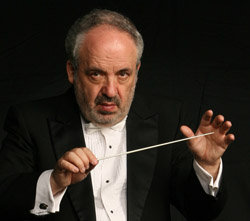 Since 1991 Misha Rachlevsky has led the Russian String Orchestra in performances throughout Moscow and the globe. Learn about his early years in Moscow before becoming an internationally-acclaimed violinist and conductor (despite disliking practice!) in our recent interview.

I was born in Moscow and educated there. My Grandma took me to the music school before my sixth birthday, two years before I began general school. I liked everything about music school, but practicing. The fact that I did become a professional musician is no less than 95% due to the wonderful teachers I had. The importance of a good teacher is impossible to overestimate, and for string players in particular.

What is your favorite musical memory or artistic work from Russia?

Even though modesty is not my forte, this one is easy to answer. I have not one, but many favorite musical memories that originated during my “Russian” years. The range of these memories is very wide, and they all have one thing in common — I was participating in them not as a performer, but as a listener. And that contributed a great deal to my development as a musician.

Tell us a little about the name Russian String Orchestra. How are you different from orchestras elsewhere?

This name is relatively new for us. For the first 25 years (the orchestra was formed in the 1991-1992 season) we were known as “Chamber Orchestra Kremlin.” There were continued attempts to “correct” it, and we were called “Kremlin Chamber Orchestra” — which, totally changes the meaning. I was fighting it as long as I could, finally realizing that I will never win this battle. Fortunately, RSO wasn’t taken and we were able to register it. As for the second question, the more sincere I will be in my answer, the more arrogant it will sound. So, my standard answer is “come and judge for yourself.”