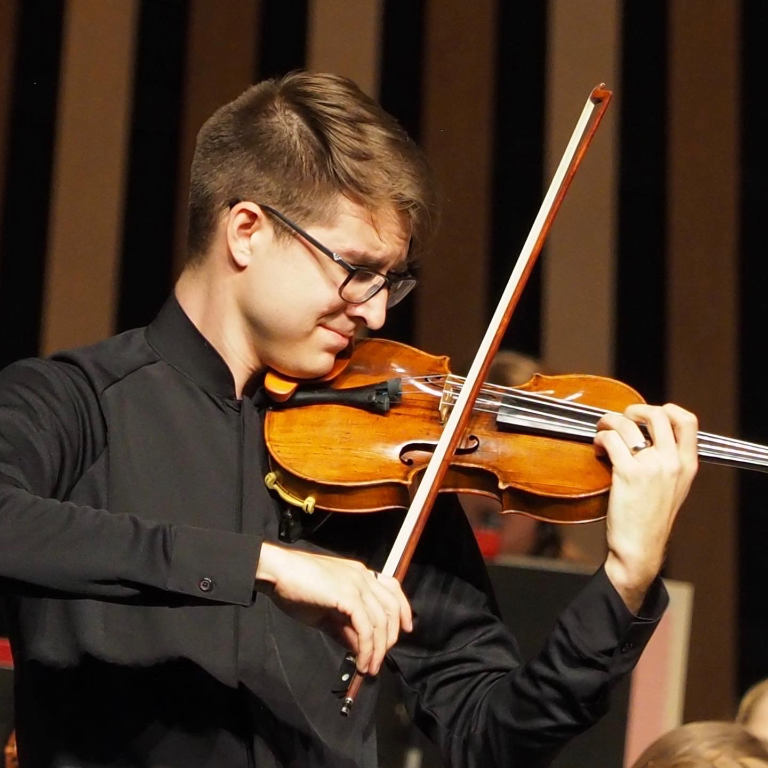 Ben Kronk is a sought-after violinist based in Austin and is one of the winners of this year’s Austin Civic Orchestra competition and will solo with the orchestra in January. Previously he appeared as soloist with the National Repertory Orchestra performing Prokofiev’s 2nd Violin Concerto under maestro Michael Stern. He has also soloed with the Toccoa Symphony, the Caroga Lake Music Festival, and will appear later this year with the Central Texas Medical Orchestra. In 2022 Ben won the American Opera Society of Chicago’s highest scholarship worth $7,000. He started the SouthEastern Young Artists Inc. (SEYA), a chamber music festival in 2018 in Georgia, bringing artists across the United States to perform chamber music in venues and private homes. He is a member of the Iris Orchestra under Michael Stern and plays with the Chicago Philharmonic Society, Folks’ Operetta, the Wisconsin Philharmonic, the La Crosse Symphony Orchestra, the Oistrakh Symphony, and acts as substitute with the Austin Symphony. Notably he has performed with celebrated artists including Matthew Lipman, Anna Petrova, Janet Sung, Stephen Balderston, Rose Ambrust Griffin, and Liang-yu Wang. Ben has attended many summer festivals including the Caroga Lake Music Festival, the Colorado College Summer Music Festival, the National Repertory Orchestra, the National Orchestra Institute and Festival (NOI+F), Meadowmount. Dedicated to music education, Ben taught at the Academie de Musique Vivaldi in Montreal, as well as at the Paul Nigra Center and the Music & Arts company in Illinois. He has also coached chamber groups at various festivals. He currently pursues his Doctorate of Musical Arts at the Butler School of Music at the University of Texas at Austin with Professor Sandy Yamamoto. Previously he earned his Post-Master’s Certificate at DePaul University with Janet Sung, his Master’s of Music at Mcgill University with Alexander Read, and his Bachelor’s of Music from the Eastman School of Music with Juliana Athayde. He plays on the GRAMMY-nominated album “American Classics” with NOI+F under maestro David Allan Miller. He has taken masterclasses with Midori and Pinchas Zuckerman.