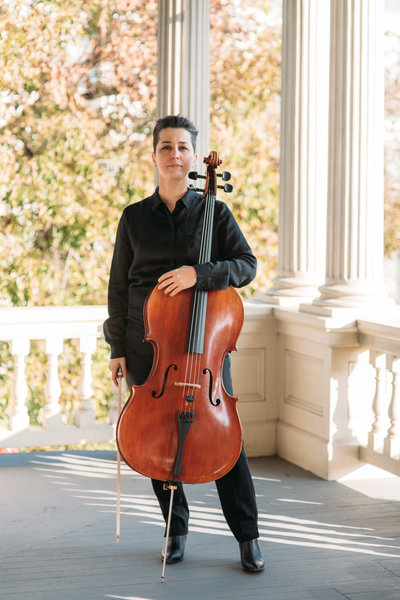 We recently spoke with this month’s featured cellist Nora Karakousoglou about her formative years in Athens. Learn about her family’s Greek holiday tradition and how it—and they—helped shape her musical life in our interview. Nora will be performing on January 18 and 19 at It’s All Greek to Me. Be sure to buy your tickets now to hear her perform with Sonja Larson and Michelle Schumann!

Where did you grow up and how did music fit into your childhood?

I grew up in a suburb of Athens, Greece. Both my parents’ occupations were centered around fixing teeth: my mother, Theodora, is a dentist, my dad, Stefanos, an orthodontist. So, naturally, I became a cellist! Well, it was not exactly that simple, but I was incredibly fortunate in three significant ways: both my parents appreciated classical music and valued music education, my dad had a substantial collection of LPs and CDs of classical masterworks by distinguished artists, and my endlessly creative aunt, Antigone, never missed an opportunity to take me to live concerts, introduce me to Greek music, and purchase music scores for me. When I was four years old, I started piano lessons with Phoebe Vallinda, with whom I studied for about four years. Though the memories of those lessons are few and a little blurry, I have a strong sense that she planted the seeds that made me who I am today. Looking back now, I realize that she was the best teacher I ever had. She was also the one who suggested to my mother that I switch to a stringed instrument. She said something along the lines of “Greece needs more good string players, we have enough pianists.” That sentence was the beginning of a long journey into unknown territory, with my mother as the explorer: she was the leading force behind finding teachers, contacting them, asking the tough questions, driving me to and from lessons. And she did all that for my three younger sisters as well, a story for another time. The first stringed instrument I tried was the violin, but it was a very rough start. After a year of struggling with it, another influential pedagogue, Nelly Oikonomidou, suggested I start the cello. I was nine years old. About two years into playing the cello, and after what seemed an impossible decision to make, I decided to quit piano lessons. Since then, I have had twenty-five years of lessons on the cello, with fourteen cello teachers in three different countries.

What is your favorite musical memory or artistic work from Greece?

My favorite musical memory comes from when I was a teenager. Had you asked me back then, I would have absolutely not chosen that as a highlight of my musical life in Greece. Now, however, I recognize its significance in my musical upbringing. My family considers hospitality to be one of the most valuable traits of a Greek household. Taking that to the extreme, as they tend to do with a lot of things, they threw some memorable Christmas parties at our house. The majority of the friends we invited were either professional musicians, amateur musicians, or just music lovers who were unafraid to sing. We would open our house at around 8pm (which is considered very early for dinner in Greece), music would start at around 10:30pm, and the last guests would sometimes leave after sunrise. At any given point we had at least three pianists, two guitarists, three violinists, and a number of volunteers for vocals. Occasionally there would be an accordion player, harmonica, bouzouki (Greek traditional instrument) or recorders. The repertoire included anything from improvisations on Greek songs and Beethoven piano sonatas to spontaneous arrangements of jazz tunes for any instrumentalist who was awake after dessert. I have a vivid memory of being asked by my dad to play some Bach for “change of pace”: it was around 4am, and the lights had been dimmed to accommodate our happy but sleepy guests, who felt comfortable to use any surface to snooze before they played another piece of music. Some of my friends were asleep on the couch, others were having their seventh cup of coffee. A colleague was dozing with her violin on her lap. One of her children was trying to stay awake, but eventually fell asleep and dropped a spoon – the sound woke everyone up. A little nervous and definitely sleepy, I began to play the famous G Major prelude for solo cello by Bach, probably for the first time in public. To this day, I don’t know if, in a room full of people, anyone even heard that a cello was being played. I remember being mad at my dad for having asked me to play, but I think I was just grumpy and sleepy. Since then, I’ve played the same piece for people to enjoy in numerous public places including department stores, grocery stores, the optometrist’s office and even the mechanic’s garage where I got my car tires changed…and also the site of the 2013 Boston Marathon bombing. Though I may have been resistant at that Christmas party, reminding myself that I made it through that unusual first performance has given me the reassurance I needed to share my music with people in public spaces. It has become one of my favorite things to do!