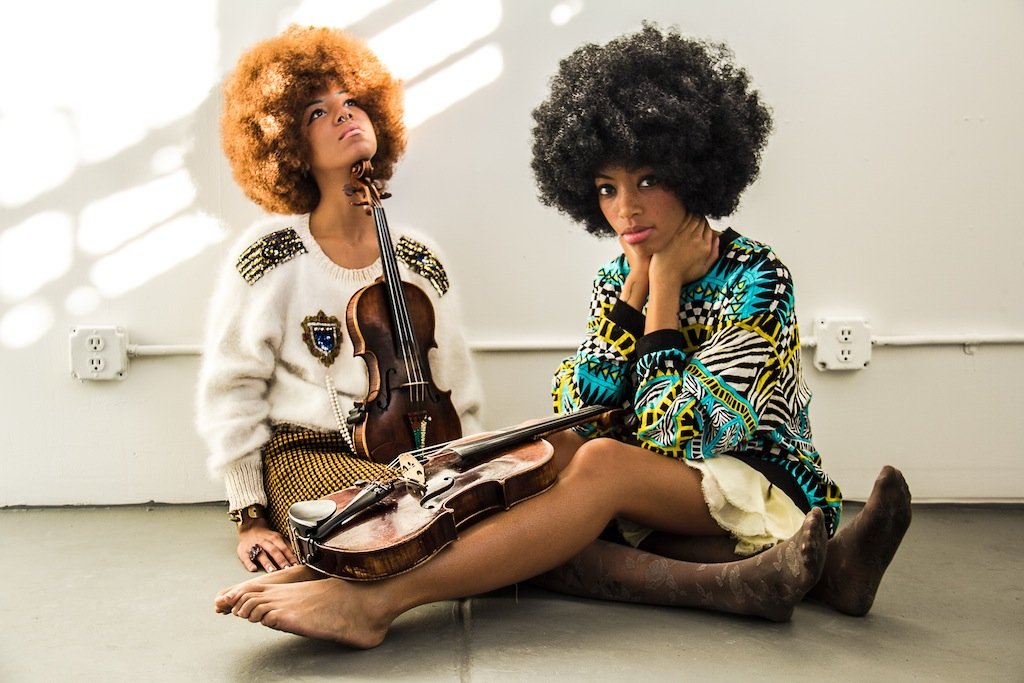 Tight shot of a violin and a viola – standard-issue instruments in every orchestra and string ensemble across the globe. Make whatever assumptions you choose about the music made with these instruments and the musicians who play them.

Now pan out to reveal the owners of these old-school music makers: two African-American women in their 20s, both with impeccably styled makeup and hair (which could be bright magenta or lemon, elaborate box braids or tight flapper curls) and chic outfits looking not just on trend but ahead of trend.

Keep panning out until we can see them in a metropolitan setting – possibly the Boston street corner where the two met by chance in 2010, or a Brooklyn subway where they spent four years honing their chops as a musical duo and finding their voice as composers – and see them surrounded by restless urbanites, stopped in their tracks to listen to the pair, to capture them in photos and on video, to ask them where their music can be purchased.

Now cue the music: violin and viola intertwining in dreamy melodic lines, repeated with synth underscoring and drum machine beats, spiced here with Eastern airs and there with hip-hop rhythms, and maybe some spoken lines or softly sung lyrics that add to the alluring, mesmerizing, and thoroughly fresh spell cast by their original compositions. Unless, that is, they’re covering, say, Kanye’s “FML” or Taylor Swift’s “Shake It Off,” Beyoncé’s “Partition” or Adele’s “Rolling in the Deep,” in which case their musical magic turns alchemical, transforming a song you knew into one that sounds like nothing you’ve heard before.

Pan out far enough and you’ll be able to see Kendrick Lamar, who included their strings in his hit “Bitch, Don’t Kill My Vibe”; fashion label Opening Ceremony, which featured the duo in one of its runway shows; J. Cole, who had the pair contribute vocals and string arrangements to his album 4 Your Eyez Only; and Michelle Obama, who brought them to the White House to perform for her Reach Higher initiative’s Fashion Education workshop.

That’s Chargaux – as in Jasmin “Charly” Charles and Margaux Whitney – the Brooklyn-based art collective that’s been defying expectations in the musical, fashion, and visual art worlds for the past seven years. Whatever preconceptions may have been prompted by seeing their instruments – I’m guessing stodgy old white dudes in tuxes, hopelessly mired in music of the 18th and 19th centuries – the fact is, classical music is a bigger, broader, even wilder world than we often imagine it to be. And the fact that Chargaux is a featured act at this year’s Austin Chamber Music Festival should also indicate that there’s more to a festival by that name than you might think.

Michelle Schumann, artistic director of the Austin Chamber Music Center and festival director for the past decade, has always sought to fill the annual summer event with ensembles and programs that reveal the full spectrum of colors in what’s considered chamber music. While never one to ignore the traditional brand of chamber music that draws on the classical repertoire of the past – she’s brought to Austin such celebrated ensembles as the Emerson String Quartet, Jupiter String Quartet, Brentano String Quartet, and this year’s St. Lawrence String Quartet – she has supplemented the chamber music we might have expected with much that we might not have: the Turtle Island Quartet playing a tribute to John Coltrane, Raúl Jaurena & the Texas Tango Five playing a tribute to Astor Piazzolla, Tosca String Quartet playing a tribute to the Beat poets, chamber operas about Anne Frank and neurologist Oliver Sacks, badass jazz trio the Bad Plus, Third Coast Percussion, Texas songbird Kelly Willis, and Chamber Music Center students-turned-hot-band Mother Falcon. In that varied array, Chargaux represents another vivid hue.

And speaking of hues, it’s worth noting the role that color plays in the art of Chargaux. Violinist Charly has synesthesia, the perceptual condition in which some sensory impressions are associated with colors. As she explained it to an interviewer with the National Endowment for the Arts: “Color for me is an involuntary sense. It’s just as natural as taste, touch, and feel. When I hear music, or when I hear any sound, there’s an aura, or there’s a series of color, or there’s a pattern of color that comes with it.

“When I listen to Alice Coltrane, a lot of her music is red and orange – she has a lot of Easter colors. When I listen to Miles Davis, his music sounds very dark: black, brown, stripes of gold. When I listen to Jimi Hendrix, we see these psychedelic colors that everybody paints him with. I don’t see those colors, but I feel these raw reds and oranges. I feel these swells, these flowers. If you could imagine how a flower feels, that’s what his music sounds like to me. So it’s not just simply a color, it’s also a texture. There might be 30 different versions of yellow that I hear from something.”

Charly goes on to say that when she and Margaux make music, “all the songs we write have a palette, a simple palette that we pull from.” She sees the music of Chargaux as “really purple.” Now’s your chance to discover what colors you see in this duo’s music – and in the other ensembles in the 2017 Austin Chamber Music Festival. You may find more colors than you expect.