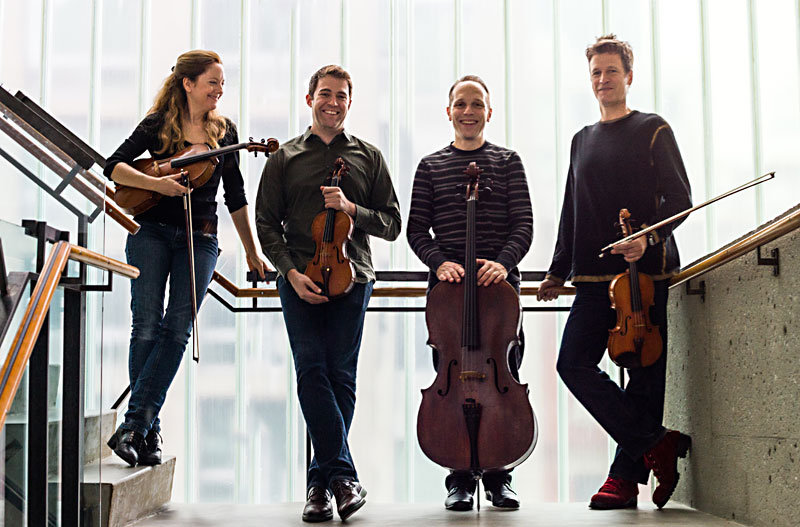 This concert was a lesson in active listening from an active, assured, exceptional ensemble
By Robi Polgar, Austin Chronicle, July 21, 2017

What is “active listening”?

A lesson: As explained – nay, taught – by Geoff Nuttall, violinist and charismatic spokesman for the St. Lawrence String Quartet (a “democratic institution”), “You don’t need to know anything [about music] to be affected, but only if you’re listening.” So, before experiencing SLSQ’s Austin Chamber Music Festival program of string quartets by Joseph Haydn and R. Murray Schafer, Nuttall and his peers – Owen Dalby, violin; Lesley Robertson, viola; Christopher Costanza, cello – highlighted sections of what was to come and encouraged the house to chime in with a vocal, emotional response (grumbling, sighing, “grrr“s and “aah“s).

Under the microscope was Haydn’s “devastating” String Quartet in F Minor, Op. 20 No. 5, one of a half-dozen quartets he wrote as Op. 20 which revolutionized the form. Haydn exploded the concept, personalizing the quartet, democratizing it, imbuing it with emotion and open expression – shocking for the time. He explored character and storytelling, adding the color of folk rhythms and melodies. And when the ensemble played the piece, there it was: the first movement’s sinister opening theme, followed by its sunnier complement (“grrr!” vs. “aah!”), two characters in conflict coming to a tense compromise. The second movement, a minuetto, a waltz, with breaths of silence among dainty and dramatic steps, a little air before the dance resumed. A love song next, an adagio, featuring moments of “butterfly improvisation” by Nuttall as Dalby assumed the melody line. Last, the fugue, a complex, follow-the-leader bit of brilliance flicked into motion by Robertson before pinging around the energetic quartet, a band that can’t sit still, such is their enthusiasm for the music. Call it “active performing.”

After intermission, Costanza introduced Schafer’s masterful Quartet No. 3. He began the first movement, a solo that evolved into a theatrical coming together of the quartet, the three other strings appearing out of (almost) thin air over the course of an ethereal piece of music. If Haydn liberated the string quartet, Schafer takes full advantage of this freedom, concocting a three-movement oeuvre that defies and delights. Droning strings and sliding shifts of notes; the performers adding yelps and shouts to a second movement that demands “maximum physical energy”; a final movement of strange tunings, rhythms, and buzzing, resolving to an ultimate peace. If George Harrison had heard this, he’d never have bothered to go to India.

The finale was Haydn’s second string quartet from Op. 20, in C major. Here was a ferocious start, with moments of respite, pitting the two violinists against the world. The selection brought more drama to an evening that had everyone on the edge of their seats, an active audience.

When commanded by the rapturous crowd for just one more selection, Nuttall held his score aloft and said, “We have the whole book of Opus 20,” and more than one in the house hoped the quartet would play every note. In the end, we had to settle for an encore of Quartet No. 1’s first movement, listening actively, delightedly, to a consummate quartet performing outstandingly good music.

Here endeth the lesson. Save for this:

When Austin Chamber Music Center Artistic Director Michelle Schumann introduced the quartet for this, its first appearance here, she noted how excited the group was because of its anticipated, as yet unconfirmed, return to town next summer. Apparently, a clause in the artist contract states that in the event of rain on the day of the performance, that artist or ensemble automatically gets asked back to the following year’s festival. Schumann delivered this news in a mock rueful tone, because everyone wants them back, because it did rain a little, somewhere (please), and because, if the SLSQ makes good on its desire to return, eager attendees have time to ensure they have tickets for the next lesson in active listening by this active, assured, exceptional ensemble.