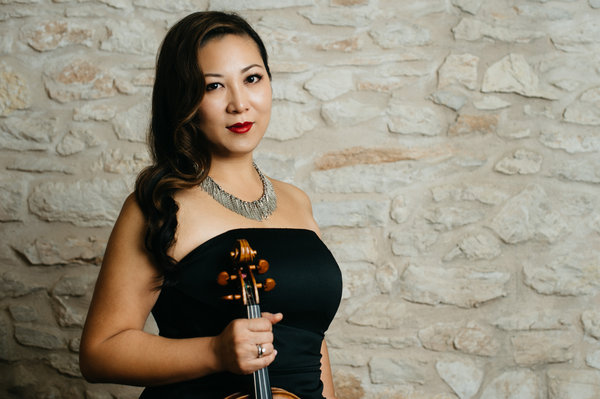 We spoke with this month’s featured artist Sandy Yamamoto about her years growing up as a violinist in a Japanese family. Learn how a rose inspired her career and where her musical side comes from in our interview. Sandy will be performing music by Debussy, Ravel, and Takemitsu on March 1 and 2 at East Meets West. Friday seats and Saturday premium seats are sold out; be sure to buy your Saturday GA tickets now to hear her perform with Amy Levine-Tsang and Michelle Schumann in their award-winning ensemble, the Schumann Chamber Players!

I grew up primarily in four places as a child. I was born in Columbus, OH, to first generation Japanese parents, so Japanese was my first language, and I started playing the violin when I was four years old and piano when I was five. I moved to Littleton, CO when I was six, then to Chapel Hill, NC when I was ten, and then I went to a boarding arts school in Winston-Salem, NC (UNCSA – University of North Carolina School of the Arts) when I was fourteen. I started playing the violin because my mom’s Japanese friend came over and brought her daughter over with her. They had just come back from a violin lesson. Since the violin was not a toy, I was not able to touch it. As a three-year-old, I was extremely curious about this “toy” that I couldn’t touch. Then, we were invited to that daughter’s violin recital. I don’t remember what she played, but when she finished playing, I remember that everyone applauded and she got a rose!! I wanted that rose so badly, that I decided that I needed to play the violin too. I begged my parents to let me play the violin for a year. Little did I know that you could just go to a florist to get a rose… I would use chopsticks, stand on our coffee table my father made (my mother still has this in her home) and pretended that I was performing. They finally found out about rental violins, rented me a violin, found a violin teacher with a Japanese wife (this was very important since my parents’ English wasn’t great), and the rest is history. My dream of getting a rose finally came true at age five when I played in a talent show. It was actually a busy evening for me. I first danced — both tap and ballet — and then I played the first movement of the Seitz Violin Concerto #5. After I finished performing, Kermit the Frog from another act of the talent show came out on roller skates, gave me a kiss, and gave me a ROSE!! My dream came true, and it inspired me to keep playing the violin. I started out with the Suzuki Method, and went through all of the books with some supplemental pieces. It was a great way for me to learn music except for the fact that I did not read music until after I finished all of the Suzuki books. Luckily, my Suzuki piano teacher implemented some note reading, so I eventually learned how to read music. Sight reading was a real challenge for me, and it took some really nice college friends to read chamber music with me every week for me to get better at reading music.

Did your family’s Japanese heritage affect your music-making?

I’m not sure if my Japanese heritage affected my music-making except for the fact that I had typical Asian parents that pushed me to do the very best in all subjects, including the violin and piano.

What is your favorite musical memory or artistic work from Japan or from your family?

My favorite musical memory with my family is probably when my father pulled out a harmonica at our wedding rehearsal dinner, and started playing all sorts of tunes including Japanese folk tunes. Not many people knew that he is a pretty talented harmonica player. He did something similar at my brother’s wedding in Japan, except he pulled out his guitar and sang a song. I think my musical side came from my father. I also found out that his father, my grandfather played violin until his house along with his violin got burned down during World War II. My grandmother from my father’s side was also musical. She played the shamisen, a Japanese three-stringed traditional instrument derived from the Chinese instrument sanxian.