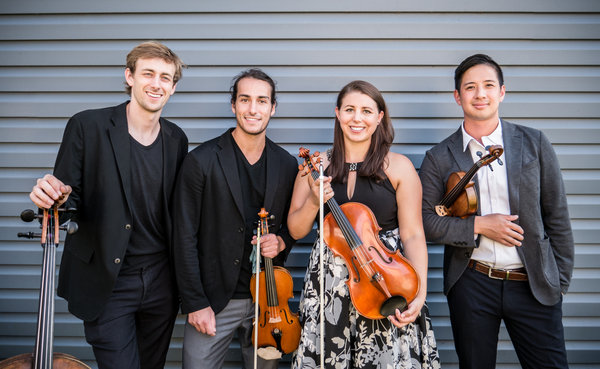 We spoke with this month’s featured artists KASA Quartet about their new Marvin Hamlisch project. Learn about their collaboration with the Hamlisch family to honor one of America’s most beloved and highly acclaimed composers, and about how the quartet interprets music from around the globe. KASA, the first prize winners of the 2017 Coltman Chamber Music Competition, will be premiering their arrangement of Hamlisch’s Sweet Smell of Success on April 26 and 27 at The Melting Pot alongside music by Robert Schumann and Joaquín Turina. Friday tickets are sold out and limited Saturday tickets are available, including only a few Premium seats; buy your Saturday tickets now!

Tell us about your Marvin Hamlisch project.

Our Marvin Hamlisch project began two years ago upon connecting with Terre Blair Hamlisch, Marvin’s widow. Kyle was asked to arrange a few of Marvin’s selections for quartet by Ms. Blair Hamlisch to be performed at an event commemorating Marvin’s life. She was very enthusiastic about the result, which led her to ask if we could explore doing more string quartet arrangements of his pieces. This includes the Sweet Smell of Success, a musical written by Marvin that premiered in 2001 on Broadway only a mere month following the 9/11 tragedy. The brilliance of this work as one of his last major Broadway musicals holds a special place for Marvin and Terre, which led us to choosing it. She knows we are performing this in Austin at the Austin Chamber Music Center Season Finale and wishes she could be there, but is thrilled to hear that this arrangement will be given its premiere at the series.

How does this project embody the idea of the pioneering American spirit?

Marvin Hamlisch was often known as the “composer of the people.” His music resonated with American concert, movie, and theater goers leading to his PEGOT honors [Hamlisch is one of only two people to have won Pulitzer, Emmy, Grammy, Oscar, and Tony awards]. For us personally, taking the music of one of the greatest American composers who has multiple genre interests fits directly within our goal to create innovative and versatile programs that feature a variety of styles. We believe his music and this project embody his versatility, and how it resonates with those trailblazing new paths.

We feel that listening to the language of the culture and understanding the history of the composer and the context of their place within that culture’s history helps inform our interpretation and sound. The slight differences in storytelling styles and articulation affect everything from phrasing to the way we use our bows and vibrato. Some of it is conscious decisions being made and other parts of it are out of instinct that has developed through years of performing these composers’ works in various settings across the globe.