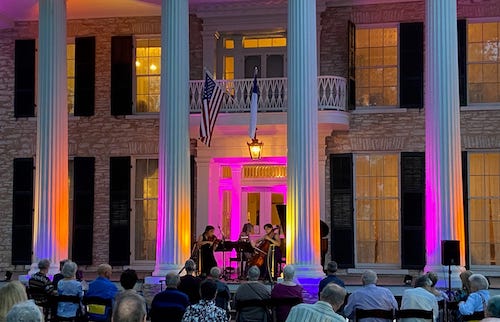 Or so I imagined as the Schumann Chamber Players opened the Austin Chamber Music Festival during an enchanted evening on the lawn of the historic Neill-Cochran House.

The tree in question is an enormous heritage pecan that sheltered the festival audience at dusk on May 27. Like the nearby 1855 Greek revival house on San Gabriel Street — with its six tall white columns and thick limestone walls — that tree likely witnessed many a musical and social event like this one during its 166-year history.

When built, the stately house perched on the rim of the Shoal Creek Canyon, located about a mile outside the Austin city limits. These days, West Campus, which surrounds the house, has become the most densely populated residential zone in the city.

Then as now, the murmur of doves and the chittering of chimney swifts would have competed gently with the sounds produced by instruments similar to the ones used this evening. The clatter of horses and mules and the clang of carriages and wagons has since been replaced by the whooshing of cars, the whop-whop-whop of helicopters and the random snide pop of a gunned motorcycle.

Despite these potential distractions, Thursday’s seated audience never took their eyes or ears off the trio of musicians seated on the front porch — Austin classical royalty, really — Michelle Schumann on piano, Sandy Yamamoto on violin and Amy Levine-Tsang on cello. In fact, quite a few passersby stopped to soak up the music. Some lingered on grassy spots outside the painted iron fence.

Schumann, always an entertaining and enlightening speaker, introduced the three pieces. Her group picked up the mood of the past pandemic year with the Trio Élégiaque No. 1 by Sergei Rachmaninov, which the composer wrote at the death of his mentor, Pyotr Tchaikovsky. Although the concert was lightly amplified, it still took a few minutes to adjust to the acoustics of the place during such a quiet piece of music.

The players were only getting started. Piano Trio No. 1 by Felix Mendelssohn — the only composer on the bill whose life predated the setting for this Austin concert — encapsulated a range of feelings associated with the current phase of the COVID-19 pandemic. We can grasp the somber moods of the first movement, the reflective sensibility of the second, the frisky playfulness of the third — few composers do frisky like Mendelssohn! — and the liberating complexity of the fourth.

It would be hard to improve on the performances of each piece. The novel setting made it all the more exceptional after more than a year without in-person chamber music.

As Austin’s arts and entertainment scene reopens one sector at a time — on the same night, Black Pumas played their second sold-out, full-capacity show of the week at Stubb’s — you can sense the excitement on the streets. Part of what defines Austin as a city is in the process of waking from a long nightmare.

If you go
The Austin Chamber Music Festival continues with the Artisan Quartet on June 3, Invoke on June 10, Artina McCain & Friends on June 17 and Festival Piano Quartet on June 24 at the Neill-Cochran House Museum Lawn, 2310 San Gabriel St. and online. Free-$40. austinchambermusic.org.