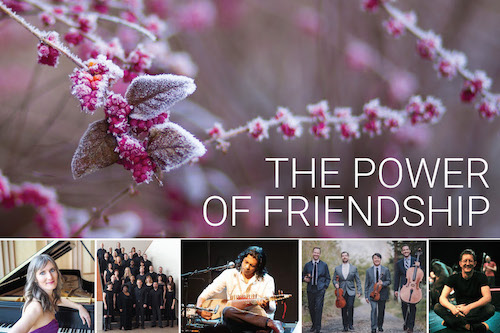 Perhaps because several of its leaders count as genuine visionaries, the Austin classical music community is unusually innovative, as well as collaborative.

Partly recorded live on Feb. 26 at the Draylen Mason Music Studio in the new KMFA 89.5 complex in East Austin — the radio station served as a producing partner, too — this digital show is expected to be available through March on YouTube. Storm response beneficiaries include Black Leaders Collective, Central Texas Food Bank and Impact Now Dove Springs.

Everything about this concert — from the first guitar, piano and violin treatment of a delicate Debussy prelude to Gutiérrez’s soulful, jazzy rendition of Carole King’s “You’ve Got a Friend” — revealed a shared, quiet musical affinity, along with “a close kinship” among the artists, as Johnson said during the show.

Early on, Conspirare, Austin’s widely admired virtuoso choir, contributed the cohesive and calming “See How the Earth” by Ross Lee Finney. This piece, like several others, had been recorded in advance.

Local singer-songwriter Fears, who participates in Austin Classical Guitar’s award-winning social/musical programs, performed one of his own songs, the heartbreakingly direct “Get Right, Get Free.”

Pianist Schumann played Ivan Trevino’s marvelously burbling “Empathy” along with percussionist Burritt, who moved over from the vibraphone to share Schumann’s piano keyboard to tie up the piece. Then she backed tonally flawless soprano Sonja Dutoit Tengblad for a song that employed tender text by poet Emily Dickinson.

Now, if you’ve never experienced the Miró Quartet, live or recorded, you have missed an Austin miracle. The tightly knit chamber group, the pride of the University of Texas, briskly glided through the “Alla Danza Tedesca” movement from Beethoven’s String Quartet No. 13.

Choral leader Johnson is particularly adept at arranging pop or rock songs into something closely suited to his singers. For instance, soloist Kathlene Ritch fronted Conspirare for a gorgeously staged version of Annie Lennox’s “1000 Beautiful Things.” You know, few singers can squeeze more emotion from a song than Lennox, yet Ritch pulled out subtle new feelings from the words and music.

I’ll admit that some of the interstitial patter from the Austin musical visionaries leaned heavily on the gooey side. Pay closer attention to the glorious purity of the music and the cause.