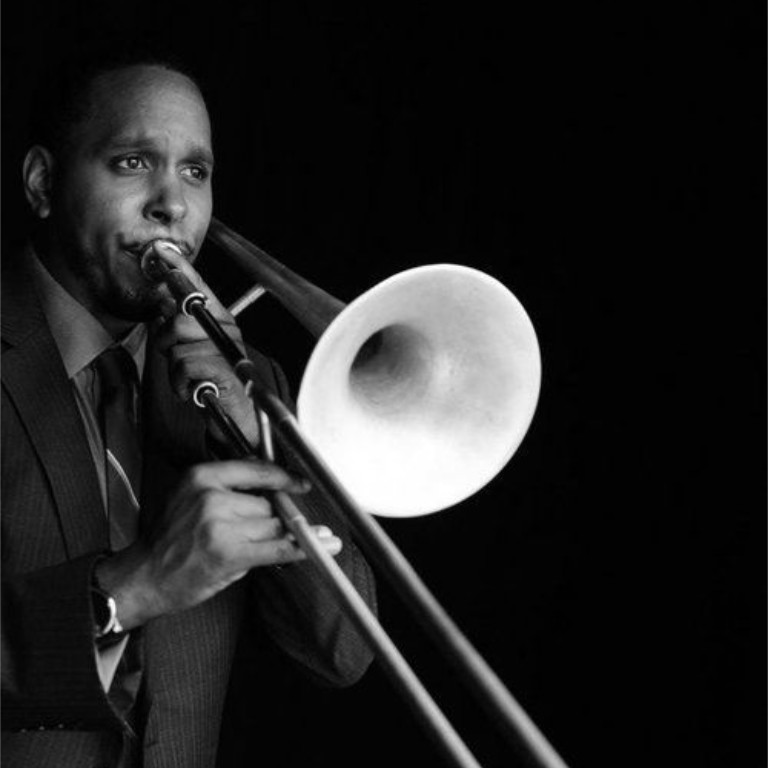 Vincent Gardner, raised in Hampton, Virginia, was born in Chicago in 1972. After much early musical exposure singing and playing piano, violin, saxophone, and French horn, he ultimately decided to pursue the trombone at the age of 12. Vincent attended Florida A&M University and the University of North Florida where he majored in jazz studies and graduated in 1996. He earned his master’s degree in jazz history and research from Rutgers University in 2013. While at Florida A&M, he caught the ear of Mercer Ellington, who hired Gardner for his first professional job. After college, he moved to Brooklyn, New York. One of his first jobs was a world tour with Lauryn Hill, then in 2000, he joined the Jazz at Lincoln Center Orchestra. Vincent has served as instructor at The Juilliard School, as visiting instructor at Florida State and Michigan State universities, and as adjunct instructor at The New School. Most recently he completed a four-year tenure as Trombone Instructor at Northwestern University.

An accomplished composer and arranger, he has contributed many arrangements to the Jazz at Lincoln Center Orchestra and other ensembles. In 2009, he was commissioned by Jazz at Lincoln Center to compose “The Jesse B. Semple Suite,” a 60-minute piece inspired by the short stories of Langston Hughes. Vincent is featured on a number of notable recordings and has recorded five CDs as a bandleader for Steeplechase Records. He has performed with The Duke Ellington Orchestra, Bobby McFerrin, Harry Connick, Jr., The Saturday Night Live Band, Chaka Khan, A Tribe Called Quest, and many others. He remains a member of the Jazz at Lincoln Center Orchestra and is the founding Artistic and Education Director of Jazz Houston.