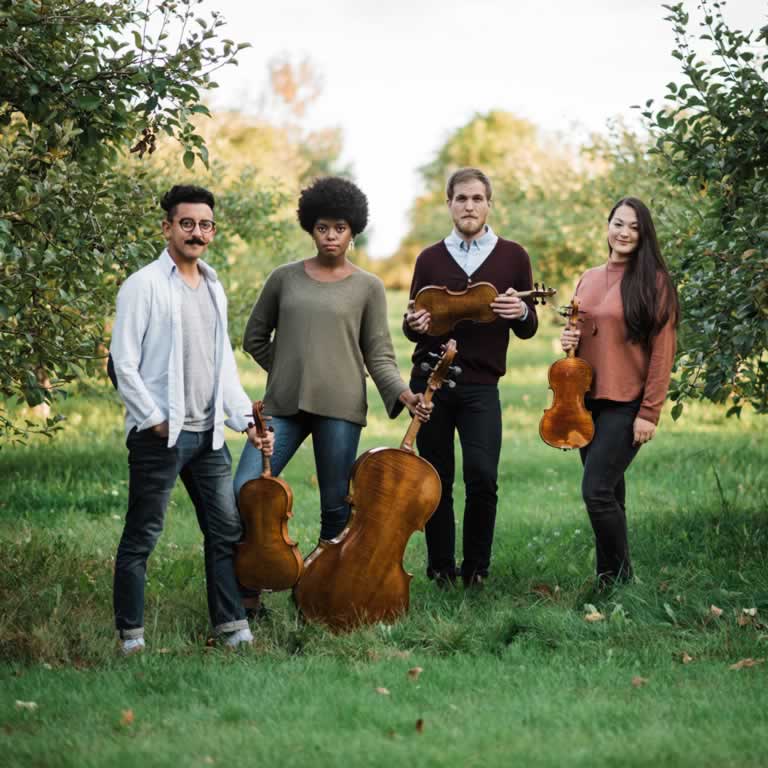 The Thalea String Quartet is dedicated to bringing timeless music to audiences from all walks of life. From living rooms to concert stages around the world, the Thalea String Quartet aims to connect with audiences on a musical, emotional and personal level, from first time listeners to string quartet aficionados. They are devoted to building a new and diverse audience for chamber music through innovative programming and community engagement.

Formed in 2014 at the Zephyr International Chamber Music Festival in Courmayeur, Italy, the Thalea String Quartet has been praised for their “vibrant performance” and “sincere expressivity” (SF Classical Voice). The quartet has performed recitals in Italy, France, the United States and Canada and was appointed as the first quartet-in-residence at the San Francisco Conservatory of Music from 2015-17. They were named one of the “Top 10 Bay Area Quartets You Should Know” by CultureTrip.com and were the recipients of the 2016 Barbara Fritz Chamber Music Award from the Berkeley Piano Club. They made their debut at the Kennedy Center in Washington, DC in early 2016. The Thalea String Quartet were top prize winners at both the 2018 Fischoff National Chamber Music Competition and the 2018 Chamber Music Yellow Springs Competition.

The Thalea String Quartet prides itself on the diversity of its collaborations. They have performed Mendelssohn’s Octet in its original manuscript form with the award-winning Borromeo Quartet and shared the stage with Pulitzer Prize-winning composer Caroline Shaw in performances of works for voice and string quartet. They have performed alongside Geoff Nuttall of the St. Lawrence String Quartet, violist Jodi Levitz and composer Mason Bates. They were invited to participate in the 2017 KRONOS Festival, where they performed works from the Kronos Quartet’s “50 for the Future” Project. Committed to collaborating with artists of all backgrounds, the Thalea String Quartet recently collaborated with San Francisco-based dance theatre company the Joe Goode Performance Group at the Yerba Buena Center and appeared with acclaimed Canadian band BADBADNOTGOOD at the iconic Massey Hall.

The Thalea Quartet has been fortunate to have been mentored by members of the Juilliard, Kronos, Takács, Pacifica and Danish String Quartets. During their multiple residencies at the Banff Centre they worked with Gilbert Kalish, Mark Steinberg, Alasdair Tait and the JACK and Miró Quartets.

The members of the Thalea String Quartet are dedicated educators and bring their commitment to teaching and community engagement to their frequent educational and community performances. They have performed educational concerts to students of all ages and regularly perform at care facilities across San Francisco.

The Thalea String Quartet was appointed as the Sphinx Ensemble at the 2018 Great Lakes Chamber Music Festival and will serve as ensemble-in-residence at this year’s Bear Valley Music Festival. They were recently named the Young Professional String Quartet at the Butler School of Music, where they will study with the highly acclaimed Miró Quartet. They will also serve as Associated Artists at the Queen Elisabeth Music Chapel for the 2018/19 season, where they will be mentored by the Artemis Quartet.

The Thalea String Quartet is a fiscally-sponsored affiliate of InterMusic SF, a not-for-profit organization dedicated to small-ensemble music in the San Francisco Bay Area.