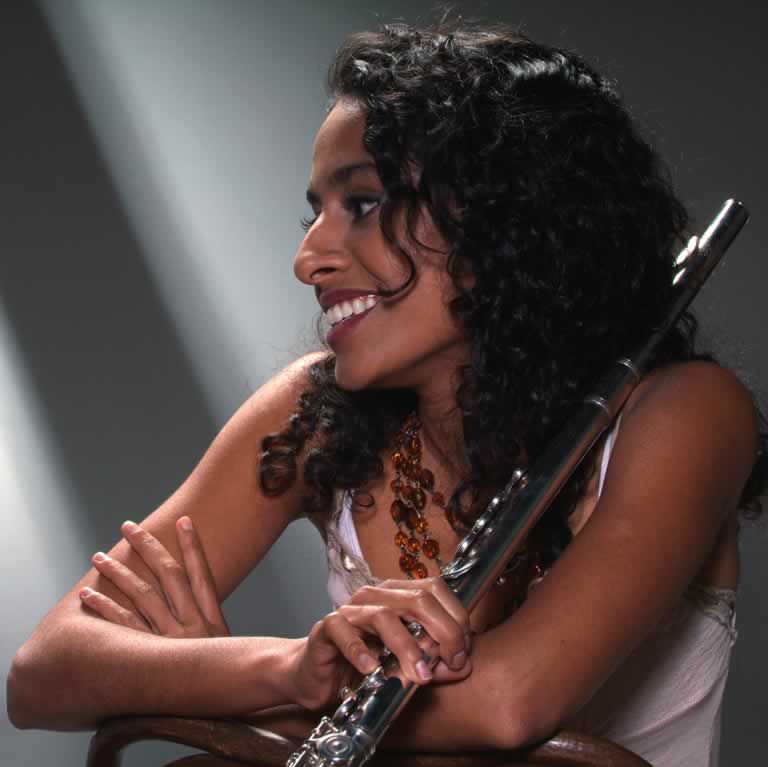 Seetha Shivaswamy, flutist, performs as a soloist and chamber musician in concerts throughout Europe, Asia, and North America. She has toured the USA with Global Rhythms World Music Ensemble, performed as a guest flutist with the Orquesta Sinfonica in Monterrey, Mexico, and presented a solo flute recital at the Hong Kong City Centre.

She has toured internationally with and recorded for Grammy/Oscar winning composer A.R. Rahman, and is the featured flutist on his single ‘Pray for Me Brother’ written for the United Nations. Her flute playing can also be heard on NYC-based experimental artist DJ Spooky’s album ‘The Secret Song’, the soundtrack to 2012 film ‘Bernie’ starring Jack Black and Shirley MacClaine, the UK feature ‘Bombil and Beatrice’, released at the Cannes Film Festival in 2007, and on the soundtrack for Terrence Malick’s film ‘To The Wonder’, starring Ben Affleck and Rachel McAdams. She has been a featured performer at South by Southwest Music Festival, Fusebox Festival, SAARANG Festival at IIT Madras, and Austin Chamber Music Festival. Seetha’s flute playing can also be heard on several recordings for PBS documentaries, TV commercials, and video games.

Seetha holds a Master’s Degree from the University of Texas at Austin and a Bachelor’s Degree from Ball State University, where she studied classical flute performance with Karl Kraber and Julia Larson Mattern. She has a certificate in contemporary flute technique and improvisation from her studies in Europe with the Dutch Flute Virtuoso Wil Offermans. Other mentors include Emmanuel Pahud of the Berlin Philharmonic, Ransom Wilson of Yale University, and Edward Beckett of London Symphony Orchestra. Seetha has done research and practice in yoga, Alexander Technique, Indonesian gamelan, Indian classical music, and various other modalities related to performance and education.

Seetha is a faculty artist with Austin Chamber Music Center, mentors students at the El-Sistema inspired program Austin Soundwaves, and maintains an active private flute studio. She is proud to be a resident of Austin, Texas, the live music capital of the world. Please visit www.austinflute.com for more details.