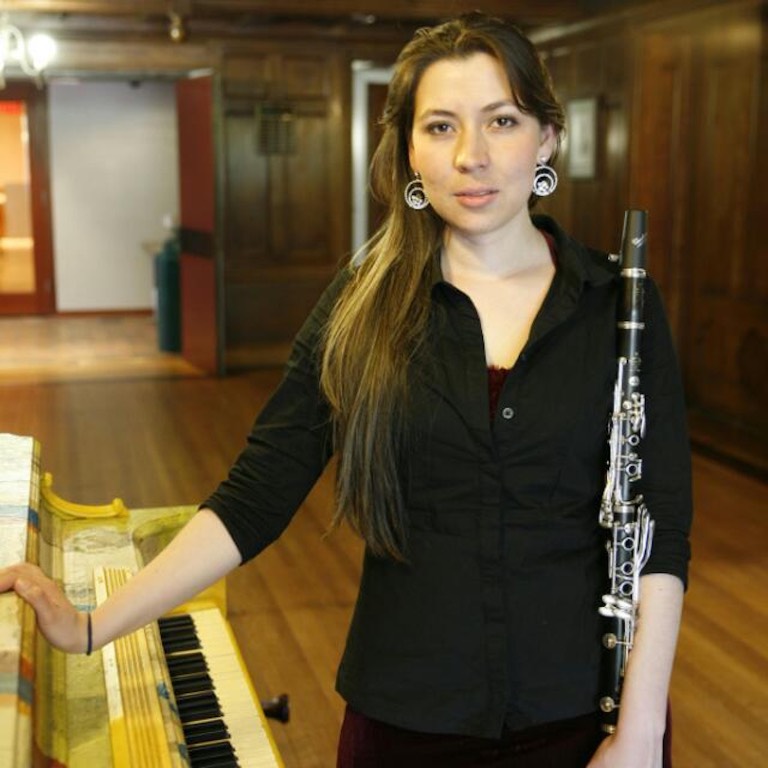 Dr. Luz Sarmiento is a versatile artist and educator with a varied career as a soloist, chamber musician, and orchestral performer. She has performed in several venues in Europe, North and South America including the Krzysztof Penderecki European Center for Music in Poland, the Boston Symphony Hall, Sanders Theater and the Julio Mario Santo Domingo Auditorium in Bogota Colombia. As a soloist, Dr. Sarmiento has appeared with the Symphony Pro Musica of Boston and the UT Lab Orchestra, as well as the National Conservatory Orchestra of Colombia. She is the recipient of numerous awards including the first prize at the National Performance Competition of Colombia 2011, the Luis Angel Arango Young Performers Series, the National University Students Performance Competition 2011, the Concerto Competition UNAL 2010 and the Longy School of Music Honors Competition 2014, as well as the second prize in the ClarinEafit Clarinet Competition 2009.

She is the founder and director of the “A Dos Music Project”, a Latin American music clarinet duo that has been expanding the horizons of Latin sound by performing traditional music with non-conventional instrumentation and demanding arrangements. The ensemble reaches a broad audience by pursuing an improvisatory and innovative manner of performance, as well as its passion for educational development and promotion of music as a means of social transformation. Dr. Sarmiento was the recipient of the Presser Music Award for her educational project that provided free concerts and lessons to almost five hundred students in the most isolated regions of Colombia, including population from indigenous communities of Brazil, Peru, and Colombia as well as refugee camps in Sweden.

As a recognition for her music education projects, Dr. Sarmiento has been awarded by the American Association of University Women AAUW with the International Doctoral Fellowship 2017-2018 and the P.E.O International Peace Scholarship 2016-2018. She finished her DMA at the University of Texas at Austin in 2018 with Steve Cohen and Jonathan Gunn, where she served as the Clarinet Teaching Assistant; earned her Master of Music at the Longy School of Music of Bard College with Jorge Montilla and her Bachelor degree from the National University of Colombia with Hector Pinzon. Additionally, Dr. Sarmiento was awarded a full scholarship to study as an exchange student at the National Superior Conservatory of Music and Dance of Lyon, France with Nicolas Baldeyrou and Robert Bianciotto. She currently serves as Woodwind Teaching Artist at Austin Sound Waves and teaches privately in the great Austin area, where she lives with her husband, clarinetist Dr. Ivan Valbuena, and her baby daughter Maya.