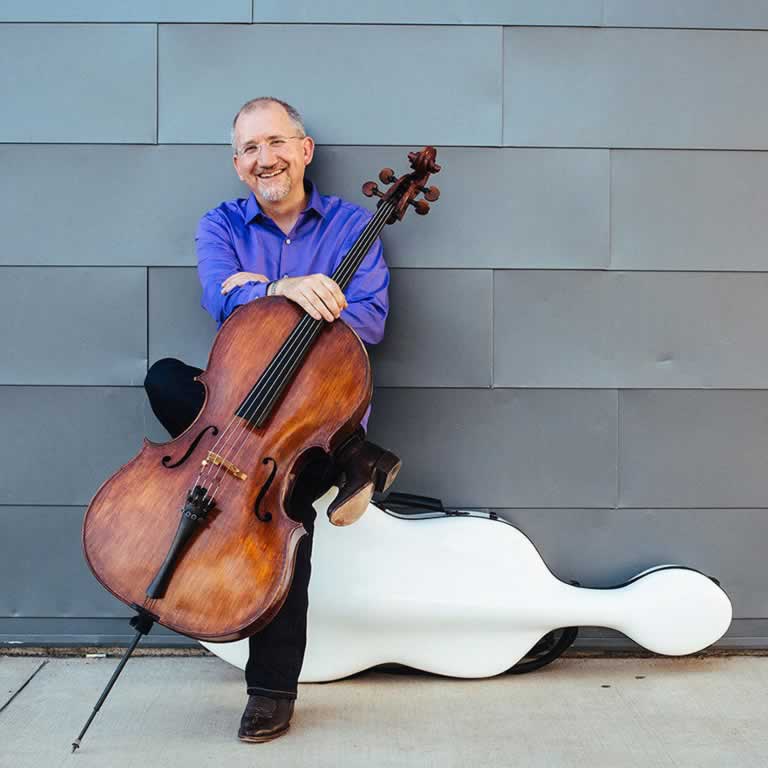 Cellist Joel Becktell has performed, taught, and lectured throughout North America and Europe. His performances have garnered critical and popular acclaim, and he has collaborated with many highly respected soloists and conductors. He is a graduate of the Cleveland Institute of Music, where he received his Bachelor and Master of Music degrees with honors, and was awarded the Rubenstein prize for cello performance. Joel has been a member of the Buffalo Philharmonic Orchestra, the Nichols Quartet, the Harrington String Quartet, and the Moveable Feast chamber ensemble. From 1995 – 2002 he served as Principal Cellist of the Austin Symphony Orchestra, and has also been Principal Cellist with the Santa Fe Pro Musica, and Assistant Principal Cellist with the Santa Fe Symphony. His experience and expertise as an orchestral cellist have resulted in frequent opportunities to perform as a guest in the cello sections of a number of orchestras, including the San Antonio Symphony and the National Philharmonic Orchestra.

Joel appears frequently on Baroque and modern cello and violoncello piccolo as soloist and with ensembles throughout North America. He has been heard as soloist with orchestras including the Austin Symphony, the Buffalo Philharmonic Orchestra, and the Santa Fe Pro Musica Chamber Orchestra, among others. Joel has collaborated in solo and chamber concerts with cellists Yo-Yo Ma, Terry King, and Brinton Smith, recorder virtuoso Marion Verbruggen, the Markolivia Duo, pianists such as Leon Fleisher, Michael Lewin, Dena Levine, and Marija Stroke, and violinists Charles Castleman, Nurit Bar-Joseph, David Taylor, and Annette-Barbara Vogel, among many others. He is a co-founder, with Carla McElhaney, of the “classical band” REVEL, an ensemble dedicated to playing concerts in an intimate atmosphere that invites listeners to discard old attitudes about “classical” music and re-enter the world of an earlier time when audiences engaged directly with the musicians in concerts.

Joel is a dedicated teacher and coach. In addition to his private studio and his annual summer studios at various festivals, he has traveled widely as a clinician and presenter of master classes. He has been a guest teacher at the University of Texas, Texas State University, the University of Iowa, the University of Western Ontario, the University of New Mexico, and the Shenandoah Conservatory, among others. Joel’s private students have been accepted into many prestigious conservatories and universities, and many have gone on to successful careers as professional cellists. He has also written on pedagogical and luthiery topics for Strings Magazine.

Joel has also pursued his abiding interests in photography, writing, and radio production. He has been on the staffs of radio stations WBFO and WNED in Buffalo, New York, and has been published as a photographer and writer in a variety of publications, including Strings and Strad magazines. He has worked in the musical instrument business for many years, drawing on his luthiery training with former cello teacher and renowned instrument maker Anne Cole. He was co-founder of Becktell-Blackerby Fine Stringed Instruments in Austin, Texas, Vice President of Eastman Strings, the world’s largest maker and distributor of stringed instruments and bows, and was also co-founder of Terra Nova Violins in San Antonio, Texas. He has been a consultant for a diverse array of music businesses, including string makers, manufacturers of violin bridges, and a company attempting to find a synthetic substitute for horsehair.

Joel resides in the mountains of New Mexico.