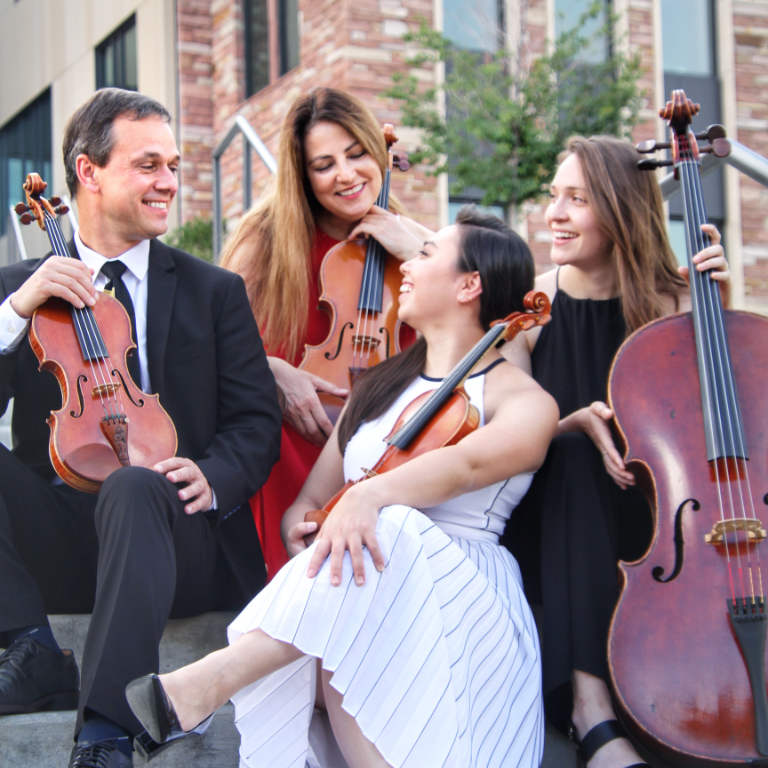 One of the most unique and sought-after chamber ensembles on the concert stage today, the Carpe Diem String Quartet is a boundary-breaking ensemble that has earned widespread critical acclaim. Carpe Diem defies easy classification with programming that includes classical, Gypsy, tango, folk, pop, rock, and jazz-inspired music. The Quartet appears regularly on traditional concert series stages like Carnegie Hall in New York City, Jordan Hall in Boston, The National Gallery of Art in Washington DC, The Accademia Chigiana in Siena, Suntory Hall in Tokyo, National Library Concert Hall in Beijing, and The BinHai Performing Arts Center in Tianjin, as well as in unconventional venues like Poisson Rouge in NYC, the Bach Dancing and Dynamite Society of Half-Moon Bay, CA, and the Mug & Brush in Columbus, OH.

“The Carpe Diem players turned in a fiery and flexible performance that was astonishingly free…” (The New York Times)
“With enthrallingly flawless execution and miraculous synchronicity, the Carpe Diem String Quartet wowed their New York audience on Saturday night at Carnegie’s Weill Recital Hall… With a flair for the romantic and technical expertise to spare, the ensemble is a perfectly structured, dexterously concentrated success…This ensemble must be held in only the highest and most reverent esteem…” (New York Theatre Guide)
“…Until Saturday evening, I had never heard a performance by one of these multilingual quartets where the classical repertoire was delivered at a level that was competitive with the finest traditional groups. But the Carpe Diem Quartet, appearing at the Dumbarton Church, was extraordinary. Among these contemporary quartets who speak in different tongues, the Carpe Diem is the best one out there.” (The Washington Post, Washington, DC)
“One would have to search long and hard to find a more charming and enjoyable chamber music concert . . . A number of elements contributed to this end result, not the least of which the superb musicianship of the four musicians – Carpe Diem is a seriously talented quartet in the most traditional definition.” (Herald-Tribune, Sarasota, FL)

Devoted to expanding the reach and impact of community engagement, Carpe Diem has been awarded six transformative outreach grants from the PNC Foundation Arts Alive Awards. The Quartet’s outreach performances incorporate diverse and eclectic repertoire tailored to specific audience demographics; use cameras, video, and artistic contributions to enrich presentations visually; rely on communication from the stage to introduce music and engage the audience; and explore fun, imaginative, and thought provoking themes to connect audiences to chamber music. These carefully crafted performances have allowed the Quartet to reach underserved audiences including The Apache Nation, Ohio Women’s Reformatory residents, and families at the Columbus Museum of Art.

CDSQ is represented in the US by:
Great Lakes Performing Artist Associates.
www.cdsq.org