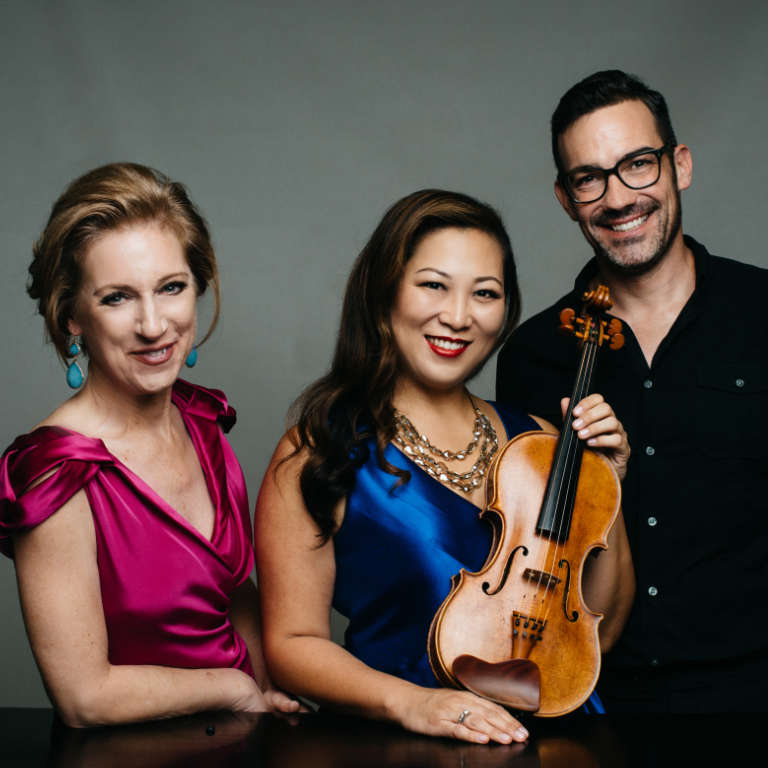 Formed in 2011 out of an undying love for the great art form of the piano trio, the Butler Trio continues to embody that mission with regular concerts of some of the most celebrated and beloved works for the medium. After fifteen years performing together as members of the Miró Quartet, violinist Sandy Yamamoto (retired 2011) and cellist Joshua Gindele were looking to continue to find ways to take the concert stage together. They found the perfect partner in pianist Colette Valentine who not only had a vast knowledge of the repertoire but shared in the unencumbered joy of making music at the highest level. For nine years the Butler Trio has earned acclaim for and impressed audiences with its dynamic, articulate and expressive performances and can often be seen performing at The University of Texas at Austin where its members are currently on the faculty.

Violinist Sandy Yamamoto has dazzled audiences in concert performances around the globe for the past three decades as a soloist and as a member of the Miró Quartet.

Ms. Yamamoto began her violin studies at the age of 4. At 11, she made her solo debut with the North Carolina Symphony and has since appeared with orchestras throughout the US and Europe to critical acclaim.

With the Miró Quartet, she has performed on the major concert stages of the world, regularly concertizing in North America, South America, Europe and Asia. As a member of the Quartet, she was a recipient of the Naumburg Chamber Music and Cleveland Quartet Awards, won First Prize at the Banff International String Quartet Competition and was one of the first chamber musicians to be awarded an Avery Fisher Career Grant. She has shared the stage with many prominent musicians including Leif Ove Andsnes, Joshua Bell, Eliot Fisk, Lynn Harrell, Midori, Jon Kimura Parker and Pinchas Zukerman.

Ms. Yamamoto was also invited to be a guest speaker and role model in New York City for the winners of the 2003 Glamour Magazine’s Top Ten College Women.

Since leaving the Quartet in May 2011, she has been appointed Senior Lecturer of Violin at the Butler School of Music at the University of Texas at Austin, where she teaches a studio of violin students and performs recitals regularly. In the fall of 2011, she formed the Butler Piano Trio with School of Music faculty members Colette Valentine and Joshua Gindele.

When she is not busy teaching and performing, Ms. Yamamoto enjoys spending time with her husband, Daniel, her two sons, Adrian and Brian, and her cat, Poko.

Cellist Joshua Gindele, a founding member of the Miró Quartet, began his cello studies at the age of 3 playing a viola his teacher had fitted with an endpin. As cellist for the Miró, Josh has taken first prizes at several national and international competitions including the Banff International String Quartet Competition and the Naumburg Chamber Music Competition. In 2005, the Miró Quartet became the first ensemble ever to be awarded the coveted Avery Fisher Career Grant.

He has shared the stage with some of the classical worlds most renowned artists including Yo-Yo Ma, The New York Philharmonic, Pinchas Zuckerman, Joshua Bell, Midori, Andre Watts and Menahem Pressler. He continues to perform across four continents and on some of the world’s most prestigious concert stages.

In 2006 Joshua co-founded www.classicallounge.com. This is an online networking site where you can meet musicians, both professional and amateur, discover new talent or get discovered, share music, post and get concert information, share opinions, post classified ads and much more. The site was sold to www.classicalconnection.com in August of 2009. Deeply committed to music education, the Miró is currently the Faculty String Quartetin- Residence at the Sarah and Ernest Butler School of Music at the University of Texas at Austin.

An active gym rat and tennis player, Josh and his wife, Rebecca Gindele, have a son and daughter, George and Nora.

Pianist Colette Valentine, one of the most active professional collaborative pianists in the United States, joined the faculty of the newly created Collaborative Piano Department at the University of Texas at Austin’s Butler School of Music in the fall of 2008. She completed her Doctor of Musical Arts degree in Piano Performance at the State University of New York at Stony Brook with Gilbert Kalish after earning Bachelor of Music and Master of Music degrees from the University of Maryland where she studied with Nelita True. From 2000-2008 she was on faculty at Long Island University, C.W. Post Campus, as an instrumental repertoire coach and faculty recital partner. She was also a faculty member at New Jersey City University from 1996-2008 where, in addition to coaching students and performing with faculty and guest artists, she taught courses in The Application of Theory in Performance and The Art of Accompanying. In the summers, she joins other professional colleagues as a coach at the Interlochen Adult Chamber Music Camp in Michigan.

Critically hailed for her “clean, sparkling technique” (Salt Lake Tribune) and for her “consummate skill and musicianship” (Classical New Jersey), Colette Valentine has performed in such important venues as Weill Recital Hall at Carnegie Hall, the 92nd Street Y, the Metropolitan Museum of Art, the Kennedy Center, the Library of Congress, the Phillips Collection, the Corcoran Gallery, and internationally in Paris, Zurich, Tokyo, Seoul, and Hong Kong. As pianist of the Ecco Trio, praised by the Washington Post for capturing “the intimacy of chamber music at its best”, she has toured the United States and Japan. She has also collaborated in chamber concerts with the New York Philharmonic Winds, St. Luke’s Chamber Ensemble, the Washington Chamber Society, the Left Bank Concert Society, the Grand Teton Music Festival and the Rembrandt Chamber players, among others. For many years, she has been official staff pianist for the William Kapell International Piano Competition, the Gina Bachauer International Piano Competition, the Washington International Competition for Strings, and the National Flute Association National Convention. She has also served in that capacity for the Leonard Rose International Cello Competition, the Marian Anderson International Vocal Competition, and the Music Teachers National Association Competitions. She has recorded for the Albany, fontec, Antara, Well-Tempered and CRI labels.