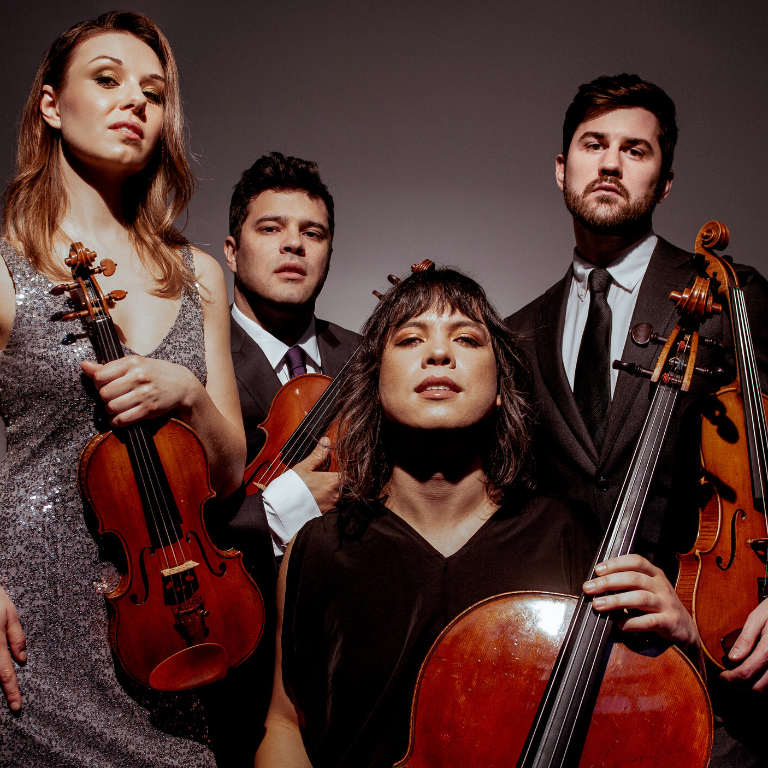 Grammy award-winning Attacca Quartet, as described by The Nation, “lives in the present aesthetically, without rejecting the virtues of the musical past,” and it is this dexterity to glide between the music of the 18th through to 21st century living composer’s repertoire that has placed them as one of the most versatile and outstanding ensembles of the moment – a quartet for modern times.

Touring extensively in the United States, recent and upcoming highlights include Carnegie Hall Neighborhood Concerts, New York Philharmonic’s Nightcap series, Lincoln Center White Lights Festival and Miller Theatre, both with Caroline Shaw, Phillips Collection, Wolf Trap, Carolina Performing Arts, Chamber Music Detroit, Red Bank Chamber Music Society, Chamber Music Austin and a residency at the National Sawdust, Brooklyn. They recently performed at the Isabella Stewart Gardner Museum, Boston, where they will return in 2020 and have performed a series of Beethoven String Quartet cycles both at the historic University at Buffalo’s Slee Beethoven Quartet Cycle series and at the New York and Trinity Lutheran Church, Manhattan, where they have a longstanding partnership. The upcoming season will see them debuting at the Trinity Church at Wall Street as part as their 12 Night Festival where they will perform the complete cycle of the Beethoven String Quartets. Attacca Quartet has also served as Juilliard’s Graduate Resident String Quartet, the Quartet in Residence at the Metropolitan Museum of Art, and the Ensemble-in-Residence at the School of Music at Texas State University.

Outside of the US, recent performances include Gothenburg Konserthuset, Sociedad Filarmónica de Bilbao, MITO Festival in Milan and Turin, as well as tours to Central and South America, and Japan; they will return to the latter in spring of 2020 with concerts in Osaka, Yokohama, and Nagoya, performing John Adam’s Absolute Jest with Nagoya Philharmonic and conductor Edo de Waart. They have previously performed this piece, under the baton of the composer, with Orquestra Simfònica de Barcelona i Nacional de Catalunya and Orquesta Nacional de España, and with Marin Alsop at the Cabrillo Festival of Contemporary Music. John Adams describes the quartet as “sharing his musical DNA.” The upcoming season will also see them debuting in London at Kings Place and Wigmore Hall, in Austria at Musik im Riesen Festival and in Oslo at the Vertravo Haydn Festival.

Passionate advocates of contemporary repertoire, the quartet are dedicated to presenting and recording new works. Their latest recording project, Orange, features string quartet works by Pulitzer-prize winning composer Caroline Shaw and has been greatly received and praised by the critics as “an outstanding performance” of a “staggering work that comes as across effortless” (Noisey). Previous recordings include three critically acclaimed albums with Azica Records, including a disc of Michael Ippolito’s string quartets, and the complete works for string quartet by John Adams. The latter was praised by Steve Smith of The New York Times as a “vivacious, compelling set” and described the Attacca Quartet’s playing as “exuberant, funky, and … exactingly nuanced”. The album was the recipient of the 2013 National Federation of Music Clubs Centennial Chamber Music Award. Additional awards for their recordings include both the Arthur Foote Award from the Harvard Musical Association and Lotos Prize in the Arts from the Stecher and Horowitz Foundation.

The Attacca Quartet has engaged in extensive educational and community outreach projects, serving as guest artists and teaching fellows at the Lincoln Center Institute, the Boston University Tanglewood Institute and Bravo! Vail Valley among others.