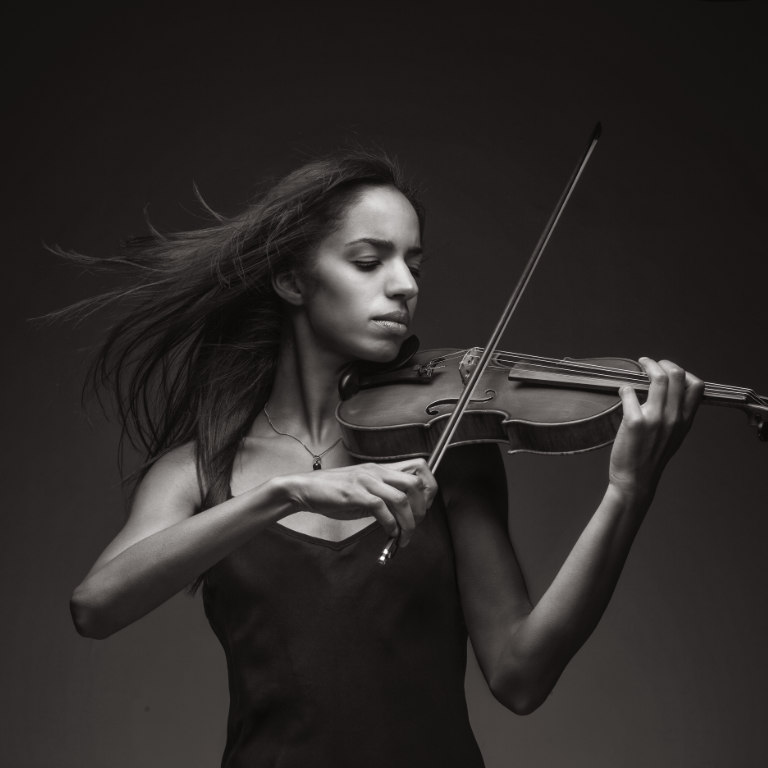 2017 Anyango made her debut as the newly appointed soloist and conductor of the Colour of Music Festival Virtuosi, an all-female chamber orchestra of African descent. Under her direction the Virtuosi are presented on the concert rosters of institutions such as University of Houston, University of Richmond, Carnegie Mellon University, Belmont University and the Duke Ellington School of the Arts in Washington, D.C. Anyango’s recent engagements include solos with the Orchestra Bellas Artes at the televised South American New Year’s Gala, live performances on BBC, NPR, FOX26, WXXI, and performing as soloist with the leading orchestras of South America. In addition she recorded AMERICANA! in 2018 – a CD of contemporary American music with pianist Vanessa Fadial (The Colburn School, LA) and performs chamber concerts with members of the Vienna and Berlin Philharmonics. Anyango will be performing the concertos ranging from Beethoven, Brahms, to Sibelius and Walton throughout the Americas during the 2020-22 season. As an active masterclass and musician health teaching artist Anyango is regularly invited to give masterclasses, recitals and hold panel discussions at leading research universities such as Emory University, University of Richmond, University of Virginia to name the most recent.

Anyango’s published and current research focuses on musician health and a healthy playing technique, as well as the development of a new technique curriculum. Anyango pursued her Doctoral degree at the Eastman School of Music (New York) where she was awarded the coveted Performer’s Certificate and served as teaching assistant to her mentor, Charles Castleman. She received her early training at the Musik Hochschule Munich (Germany), the University “Mozarteum” Salzburg (Austria) with additional studies at the Sibelius Academy Helsinki (Finland) with Paivyt Meller. A dedicated teacher, Anyango was awarded the Jack L. Frank Award for Excellence in Teaching. Her students win top prizes in international competitions, hold orchestra positions in South America, Europe and US, and have been accepted into the top universities of Germany, France, Austria, Spain and the USA.

Currently she is Professor of Violin and Coordinator of Violin and Chamber Music at the Pontifical Javeriana University in Bogota (Colombia) as well as artistic director, soloist and co-program curator of the Colour of Music Festival Virtuosi. She is also summer faculty at the music festivals of the Virginia Commonwealth University (GSIM) and the University of North Texas (SSI). Anyango conducted and directed the New Horizons Orchestras at Eastman from 2009-14. The WXXI documentary Music for Life: The Story of New Horizons in which Anyango and her orchestras appear, won at the 59th Emmy Awards.

Anyango performs on an 18th Century French violin and chooses from bows ranging from the Peccatte School to contemporary makers, supported by Olitarte. www.anyangomusic.com