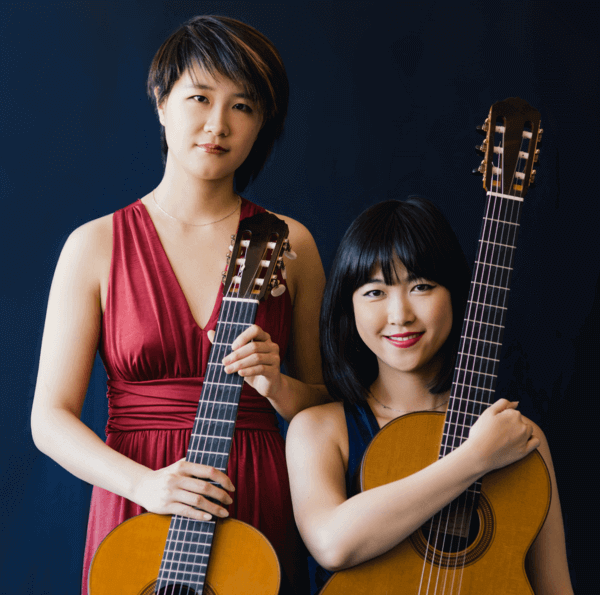 What do you enjoy the most about performing?
I really like performing, it’s part of my life, I mean it’s something I got really used to when I was a kid. And as a kid I think I wanted just to show what I have— I can play this piece, I can play this fast… I’ve been playing the guitar for about 25 years now and it’s kinda changed me and changed my playing, because you keep experiencing life, love, anger… you experience many feelings. Now, it’s the feelings that I’m going after, like the guitar is like equipment to express my feelings. Same with Yameng in [Beijing Guitar Duo]… I’ve known her since I was five, but really started playing professionally [with her] 10 years ago, shortly after we came to America. And it’s really fun to play with her because we’re very close friends, and our musical ideas were very similar when we started. Of course, there are different opinions from time to time but basically we have very similar sounds. So, what we hear a lot from our audience is that we sound like one person. That’s really something we’re going for—to create music that sounds like one person.

Did you or do you ever get performance anxiety?
That’s interesting because I would say before 18 I had none. I was just so relaxed—I mean, I wasn’t thinking much. I think after 18 you become more conscientious about your playing… and that’s why performance anxiety hit me for a while. But then I realized it’s mostly because you’re afraid to forget your music on stage, or your fingers just can’t move. So, I really thought of things to do to avoid that; for example, I started doing visualization… going through the music in your head, imagining where your left hand fingers would be on the fingerboard and which fingers to pluck on your right hand. And you can do this whenever possible, like in the airport waiting, or in the bank… And then for flexible fingers I developed this warm-up routine before I go on stage. Before, I used to just go cold, I would not warm up. As a kid I thought that was okay for me, it was like excitement right away. But, I think with a little warmth it’s better. So, I think I got the solutions to both problems.

What advice do you give to students and young children just starting guitar?
Try to play slowly and try to practice slowly. Personally, when I was growing up… I always wanted to play fast… But really, slow practice [is] very efficient and I’ve seen young players playing really fast but not clean, and the rhythm is not so accurate. When you hear that, you don’t get impressed because it’s not at a high standard. So, we always want to play slowly, and then you can get faster and faster, then you can get a really impressive control of music.

What do you hope the audience comes away with after a performance?
If they can be touched by any part of the music then I’m happy.

What are some of your favorite pieces?
All the pieces that we play are our favorites, but there’s a piece that just keeps coming back by request or just by our own request: the Chaconne. This is a Chaconne that is not only Bach, it’s the piano arrangement made by Busoni in the early 20th century. So, we always say it’s Bach-Busoni because it’s a little bit more romantic than what Bach originally wrote. Busoni added a lot of different harmonies, different bass lines, and he changed one or two parts’ texture. I think it’s a wonderful piece of music and it doesn’t necessarily have to be purely Bach… We actually played this piece for many years before we changed our program probably four to five years ago, but last year we got a request [for it]. I think it was in Houston. And it was just a very popular request, so we took it and I think we’re going to play it more, including this time in Austin.

Do y’all like to play the traditional classical guitar repertoire, or play different styles?
The guitar is so popular in many styles, and for contemporary music I think we all have a duty to explore the repertoire… We also do some arrangements, like the Debussy piece we’re going to play this time in Austin, it’s called Petite Suite. It’s for four hands piano and I did the arrangement for two guitars because, you know, we have four hands too. But, I think Debussy [and] impressionist music work really well on guitar, or two guitars is even better, just because we have so many different colors, tones, and the ringing strings can really bring out the impressionistic feelings.

What is your favorite era of music to play on the guitar?
I love everything really, but the Baroque music I think I have to play it all the time. Even not performing, just in my practice, I have to every day play a little bit of Baroque just to get those deep feelings, deep interpretation of feelings. Some pieces like Latin music and Romantic music, it’s kinda easier to express because you do phrases and things like that, but Baroque there’s more rules to it. It’s more of a subtle, deep, yet still very expressive feeling… Also, on the [Austin Chamber Music Festival] program is the Tango Suite by Piazzolla. It is our longtime favorite piece. It’s the only piece for two guitars that Piazzolla wrote for the Assad brothers. It’s just so well written and such an essential tango, and so effective, exciting.

You and Yameng seemed to follow the same path, being born in the same city, go to the same conservatory, and then y’all both went to Peabody. Did you coordinate that, or did it happen by coincidence?
I think it was just meant to be, because at that point in China the best teacher was in Beijing, professor Chen. So, I think every parent from all over China, if their kid was good, they’d want to send them to Beijing. Yameng is a couple years older than me, so when I was five and I started, she already had the record of the youngest champion of the Tokyo International Guitar Competition. So, she won at 12, competing with other guys who are in their 30s. So, that was like huge, huge news in China and definitely a boost to my parents. So, we always had the same teachers but at different times in the beginning. A couple years later I went to Beijing, and she was in high school and I just entered middle school and she was always someone I looked up to and wanted to try to be as good as. After a couple years my teacher took me to competitions, and I won a couple of them and then he encouraged us to play in a duo, so when we went out to play as a studio, we used to play a piece or two as a duo. But it was not until we came to Baltimore together in 2006 and she was here for her Masters and I was here for my undergrad, and Mr. Barrueco, our mentor, really thought we should do this professionally and he encouraged us to form the Beijing Guitar Duo. That was in 2009, and it was then that we released the first duo recording, Maracaípe, and did our debut recital in New York’s Carnegie Hall. So, after that we started to tour in America and internationally.

Anything else you’d like to add?
I just want to say it’s really nice to be back in Austin. I really admire what you guys are doing there, and what you have done. I think all American guitar societies are trying to do the same with their communities, and that would be something really awesome, really great. I think the guitar is an art of music, but it is also such a great instrument to connect people. From my experience from traveling to different countries… you see guitarists playing Giuliani, playing Sor, when they’re trying to study the guitar. It’s just really amazing because you can speak different languages but play the same music, and I think it’s a great way to connect people, it’s really, really great. So, we’re looking forward to returning to Austin and seeing everybody there!