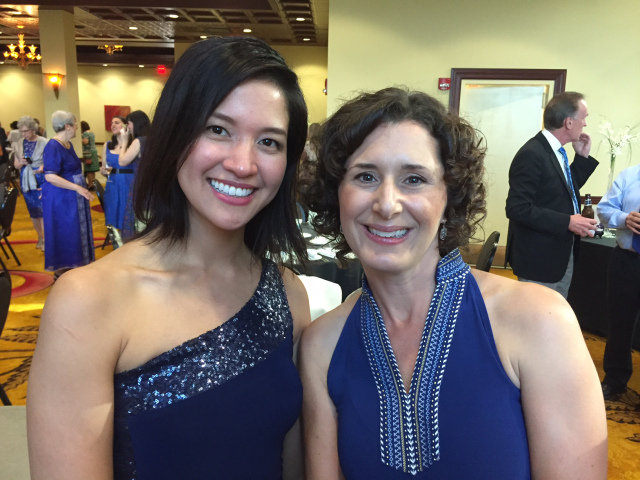 Enraptured by chamber music at the Blue Bash

Chamber music demands it. You will be rewarded beyond measure.

I’ve been away from live chamber music for a while. I’m back. Never going away again.

The Blue Bash, which benefits the estimable Austin Chamber Music Center, took place this year at the Renaissance Austin Hotel. Not in the ballroom, but rather the smaller space with a forest view and high, arched ceilings. A little tinny for chat over dinner, but well suited for quiet music.

About 150 enraptured guests gathered to hear Michelle Schumann, the center’s artistic director and an immaculate pianist, play the arboreal “Walderauschen” by Franz Liszt. She was joined by gifted clarinetist Håkan Rosengren for a dynamic “Fantasiestucke” by Robert Schumann.

After Robert Duke, the brainy University of Texas music professor from “Two Guys on Your Head” NPR radio show, spoke about the real merits of music eduction — hint: it doesn’t improve your academics as is so often claimed — Schumann and Rosengren were joined by a young clarinetist, Julius Calvert, whom the center has groomed and is headed to Indiana University. They played the frolicking Concert Piece No. 1 for Two Clarinets by Felix Mendelssohn.

It could not have been more gratifying.

I was surprised that more was not said from the stage about the upcoming Austin Chamber Music Festival, but I suppose everybody in the room already knows about it and plans to attend.

In that case, I thank the center folks for not overselling it. How many hours have been chewed up at Austin benefits explaining again and again what a nonprofit does to people mostly already in the know.