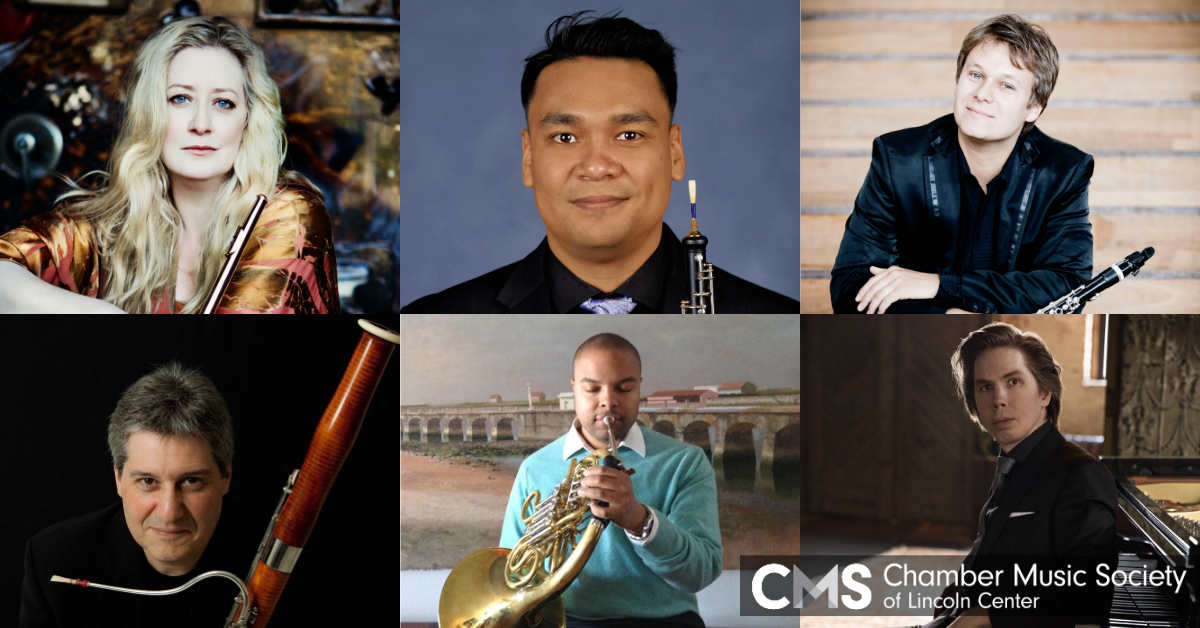 ACMC takes you to NYC for a program featuring some of the world’s finest chamber musicians. The Chamber Music Society of Lincoln Center will present favorite works for winds and piano, including Poulenc’s Sextet, Beethoven’s Quintet for Piano and Winds, and music by Reicha, Ligeti, and Françaix.

Advance tickets on sale now. Save up to 30% on your tickets by getting a discount package of 3+ Festival concerts. Subject to availability, $12 Student Rush (with student ID), $30 General Admission, and $55 Premium tickets may be purchased at the box office on the evening of the concert. The box office will open at 6:30 PM that day. If you prefer to watch online, please select a virtual ticket. Virtual tickets are available on a sliding scale and provide on-demand access starting the Monday after the concert until the end of July.

The Chamber Music Society of Lincoln Center (CMS) is one of eleven constituents of the largest performing arts complex in the world, Lincoln Center for the Performing Arts, which includes the New York Philharmonic, New York City Ballet, Lincoln Center Theater, and The Metropolitan Opera. Through its many performance, education, recording, and broadcast activities, CMS brings the experience of great chamber music to more people than any other organization of its kind. Under the artistic leadership of David Finckel and Wu Han, it presents a wide variety of concert series and educational events for listeners of all ages, appealing to both connoisseurs and newcomers. The performing artists constitute a revolving multi-generational and international roster of the world’s finest chamber musicians, enabling CMS to present chamber music of every instrumentation, style, and historical period. CMS’s incomparable digital presence, which regularly enables CMS to reach hundreds of thousands of listeners around the globe annually, includes: A growing number of live-streamed programs; more than 750 hours of performance and education videos free to the public on its website; a 52-week public radio series across the US; radio programming in Taiwan and mainland China; appearances on American Public Media; the new monthly program “In Concert with CMS” on the ALL ARTS broadcast channel; and performances featured on Medici.tv, Tencent, and SiriusXM’s Symphony Hall channel.

Tara Helen O’Connor is a charismatic performer noted for her artistic depth, brilliant technique, and colorful tone spanning every musical era. Recipient of an Avery Fisher Career Grant and a two-time Grammy nominee, she was the first wind player to participate in CMS’s Bowers Program. She regularly appears at the Santa Fe Chamber Music Festival, Music@Menlo, Chamber Music Festival of the Bluegrass, Spoleto Festival USA, Chamber Music Northwest, Mainly Mozart Festival, Music from Angel Fire, the Banff Centre, Rockport Music, Bay Chamber Concerts, Manchester Music Festival, the Great Mountains Music Festival, Chesapeake Music Festival, and the Bravo! Vail Valley Music Festival. She is the newly appointed co-artistic director of the Music From Angel Fire Festival in New Mexico. She is a member of the woodwind quintet Windscape, the legendary Bach Aria Group, and is a founding member of the Naumburg Award-winning New Millennium Ensemble. She has premiered hundreds of new works and has collaborated with the Orion String Quartet, St. Lawrence Quartet, and Emerson Quartet. She has appeared on A&E’s Breakfast for the Arts, Live from Lincoln Center and has recorded for Deutsche Grammophon, EMI Classics, Koch International, CMS Studio Recordings with the Chamber Music Society of Lincoln Center, and Bridge Records. A Wm. S. Haynes flute artist, she is an associate professor at Purchase College. Additionally, she is on the faculty of Bard College, Manhattan School of Music, and is a visiting artist at the Royal Conservatory of Music in Toronto.

Hugo Souza has performed extensively throughout Brazil, North America, and Europe as a soloist, chamber musician, and orchestral player. He is Principal Oboe of the Columbus Symphony Orchestra. He has had the honor of performing with the Orpheus Chamber Orchestra at Carnegie Hall, as a guest artist at Music@Menlo, and with the ensemble Pentaèdre in Montreal. He also has performed with the American Ballet Theatre and American Symphony Orchestra.

Born into a musical family in Natal, Brazil, he began playing oboe at age fourteen. He went on to earn his bachelor’s degree in oboe performance at the Universidade Federal do Rio Grande do Norte (UFRN), where both of his parents serve as faculty in the music department. Hugo continued his studies in the United States, earning his Master of Music from SUNY Purchase as a student of Maestro Humbert Lucarelli. He is a doctoral candidate at the Eastman School of Music at the University of Rochester, where he studies with Richard Killmer. During his time at Eastman, Hugo took a leave to accept a teaching position at his alma mater in Natal (UFRN). While on faculty at UFRN, he played an integral role in raising the oboe’s visibility and popularity throughout the country. He co-founded the Brazilian Double Reed Society, an organization which continues to foster a thriving community for double reed players and has amplified classical music’s role in Brazilian culture.

Hugo is on faculty at Capital University’s Conservatory of Music. He resides in Columbus, where he enjoys spending time with his wife and son, exploring the surrounding culinary scene, and creating fusion recipes.

Clarinetist Sebastian Manz has been praised for his “enchantingly beautiful intonation and technical prowess” by Fono Forum. In the 2019/2020 season he performs as a soloist with major European orchestras such as the Camerata Salzburg and the Munich Chamber Orchestra. On the chamber music stage, he gives performances at the Elbphilharmonie Hamburg, the Concertgebouw Amsterdam, and will appear at different festivals including the prestigious festival Heidelberger Frühling in Germany and the Jazzfestival Viersen, collaborating with artists like Sebastian Studnitzky, Herbert Schuch, Sarah Christian, Julian Steckel, the wind quintet variation5, the Danish String Quartet, and the Armida Quartett. At the ARD International Music Competition in 2008, he won not only first prize in the clarinet category, which had not been awarded for 40 years, but also the coveted Audience Prize and other special prizes. He is solo clarinetist with the SWR Symphony Orchestra in Stuttgart and artistic director of the festival :alpenarte. He is also active in the “Rhapsody in School” organization founded by Lars Vogt, which is committed to bringing classical music into schools. His recording of the complete works of Carl Maria von Weber was included in the list of the German Record Critics’ “Quarterly Critics Choice” and won an ECHO Classic award. He recently released his recording “A Bernstein Story.” Mr. Manz was born in Hanover, and his teachers include the acclaimed clarinetists Sabine Meyer and Reiner Wehle. He is a member of CMS’s Bowers Program.

Atlanta native David Byrd-Marrow is the Solo hornist of the International Contemporary Ensemble, as well as The Knights. Working with a uniquely wide range of performers, he has premiered works by Matthias Pintscher, Arthur Kampela, George Lewis, Tyshawn Sorey, Anna Thorvaldsdottir, Du Yun, Marcos Balter, Wang Lu, Kate Soper, Miguel Zenón, and Chick Corea. He has performed at festivals including the Ojai Music Festival, the Spoleto Music Festival, the Mostly Mozart Festival, the Tanglewood Music Center, Summerfest at the La Jolla Music Society and as faculty at the Festival Napa Valley. Formerly a member of Carnegie Hall’s Ensemble Connect, he has also made appearances with the New York Philharmonic, Decoda, the Atlanta and Tokyo symphony orchestras, the Orpheus Chamber Orchestra, the Mostly Mozart Festival Orchestra, the Washington National Opera and the Chamber Music Society of Lincoln Center. He has recorded on many labels including Tundra, More Is More, Nonesuch, EMI, Deutsche Grammophon, and Naxos. Mr. Byrd-Marrow received his Bachelor of Music degree from The Juilliard School and Master of Music from Stony Brook University.

David is the Assistant Professor of Horn at the Lamont School of Music, of The University of Denver.

Finnish pianist Juho Pohjonen performs widely in Europe, Asia, and North America, collaborating with symphony orchestras and playing in recital and chamber settings. In 2021-22 he performs Daniel Bjarnason’s concerto for piano Processions with the Helsinki Philharmonic with the composer at the podium. Additional orchestral highlights include performances of Rachmaninov’s Second Piano Concerto with Rune Bergmann and the Colorado Symphony as well as performances of Mendelssohn’s concerto for violin and piano with the Minnesota Orchestra. The pianist has previously appeared in recital at New York’s Carnegie Hall and Lincoln Center, at the Kennedy Center in Washington, DC, and in San Francisco, La Jolla, Detroit, Savannah, and Vancouver. He made his London debut at Wigmore Hall, and has performed recitals in Antwerp, Hamburg, Helsinki, St. Petersburg, and Warsaw. His most recent recording with cellist Inbal Segev features cello sonatas by Chopin and Grieg, and Schumann’s Fantasiestücke, hallmarks of the Romantic repertoire. His previous recordings include Plateaux on Dacapo Records and Maps and Legends on the Music@Menlo Live series. He is a member of the Sibelius Trio, which released a recording on Yarlung Records in honor of Finland’s 1917 centennial of independence. He launched MyPianist in 2019, an AI-based iOS app that provides interactive piano accompaniment to musicians everywhere. Pohjonen earned a master’s degree from Meri Louhos and Hui-Ying Liu-Tawaststjerna at the Sibelius Academy in 2008. An alum of The Bowers Program, he enjoys an ongoing association with the Chamber Music Society of Lincoln Center.