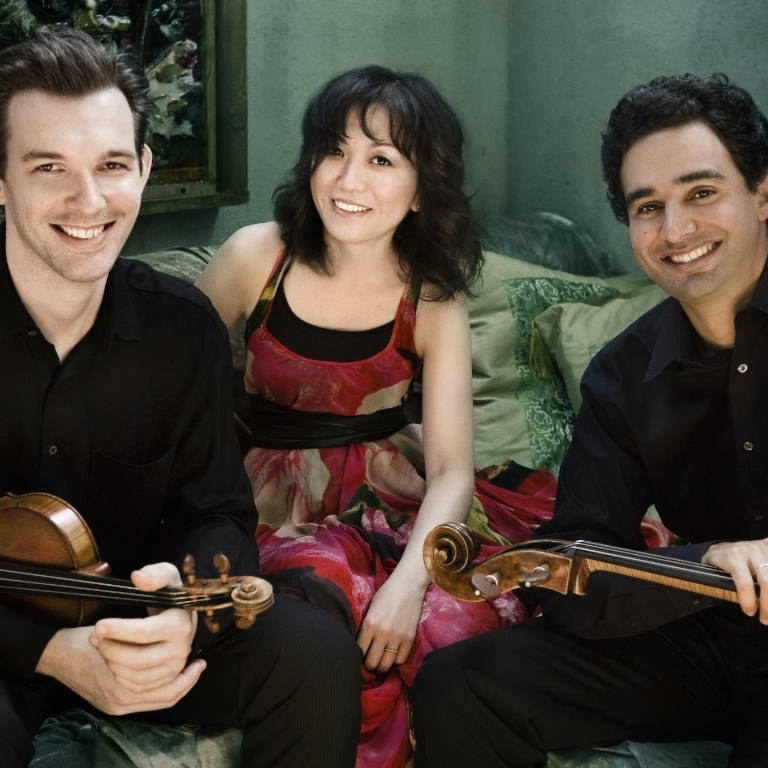 Giving performances that are “lithe, persuasive” (The New York Times), “eloquent and enthralling” (The Boston Globe), and described as “the most compelling American group to come on the scene” (The New Yorker), the Horszowski Trio has quickly become a vital force in the international chamber music world. Since their debut performance in New York City in 2011, they have toured extensively throughout North America, Europe, the Far East, and India, traversing the extensive oeuvre of traditional piano trio repertoire and introducing audiences to new music that they have commissioned and premiered.

In March 2019, the Horszowski Trio made its London debut in a sold-out concert presented by Wigmore Hall. In the same season, they also appeared at the 92nd Street Y in New York City; the Kimmel Center in Philadelphia; Schubert Club in Saint Paul, Minnesota; Spivey Hall in Atlanta; Bowdoin Music Festival in Maine; UCLA in Los Angeles; Dresden’s Moritzburg Festival (Germany); and venues in Boston, San Francisco, Canada, and Japan, among others. In addition, they released a recording of the complete piano trios by Robert Schumann on AVIE Records, receiving tremendous acclaim: “great care and affection” (BBC Radio); “intoxicating” (Gramophone); “exciting and deeply felt” (Strings); “fresh, supple and fantastic” (The Strad).

The Trio takes its inspiration from the musicianship, integrity, and humanity of the pre-eminent pianist Mieczysław Horszowski (1892–1993); the ensemble’s pianist, Rieko Aizawa, was Horszowski’s last pupil at the Curtis Institute in Philadelphia. In New York City, Ms. Aizawa met violinist Jesse Mills and cellist Raman Ramakrishnan, who had a decades-long musical partnership going back to their days at Juilliard and Marlboro, and the three immediately felt the spark of a unique connection.

Described as “power players” by the Los Angeles Times, the Horszowski Trio’s repertoire includes works by many of the composers with whom Mr. Horszowski had personal interaction, including Gabriel Fauré, Enrique Granados, Bohuslav Martinů, Maurice Ravel, Camille Saint-Saëns and Heitor Villa-Lobos. The Horszowski Trio’s debut recording – an album of works by Gabriel Fauré, Camille Saint-Saëns, and Vincent d’Indy on the Bridge label – was released in 2014 and dedicated to the memory of Mieczysław Horszowski. Gramophone praised the “exemplary performance” of the “highly accomplished group,” concluding, “I long to hear more of the Horszowski Trio.”

The ensemble has performed the complete cycles of piano trios by Ludwig van Beethoven, Robert Schumann, and Johannes Brahms. They also actively cultivate hidden treasures from the repertoire, works by Arno Babajanyan, Leonard Bernstein, Vincent d’Indy, Arthur Foote, Germaine Tailleferre, and Morton Feldman. The Horszowski Trio is a passionate advocate for the music of our time. They have worked with the legendary composers John Harbison, Charles Wuorinen, and Joan Tower, for whom the Trio recorded “For Daniel” in celebration of her 75th birthday. Recent premieres include works by Daron Hagen, Eric Moe, and (through a grant from Chamber Music America) Andreia Pinto-Correia. Forthcoming premieres include works by Scott Lindroth, Louis Karchin, and Charles Wuorinen in addition to their “Phantasiestücke Project” celebrating their 10th anniversary with three new works by Derek Bermel, Paul Chihara and David Fulmer. The Trio’s violinist Jesse Mills, a two-time Grammy nominee who is also a composer and arranger, wrote “Painted Shadow” for the ensemble; the work was commissioned by and premiered at Bargemusic in Brooklyn, New York in January 2015.

The Horszowski Trio enjoys opportunities to expand its chamber music horizons through collaborations, and has worked with such musicians as Aaron Boyd (from the Escher Quartet), Kikuei Ikeda (Tokyo Quartet), Masumi Per Rostad (Pacifica Quartet), Phillip Ying (Ying Quartet), and Roberto Diaz.

The Horszowski Trio is based in New York City. It is the Ensemble-in-Residence at the Longy School of Music of Bard College in Cambridge, Massachusetts, and of the Leschetizky Association in New York City.