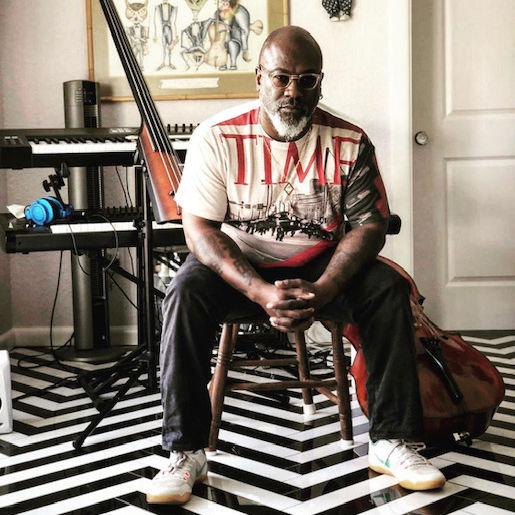 Derek Menchan, still riding the crest of a high wave of success from the 2018 release of his self-produced debut album, “The Griot Swings the Classics,” is a “classically” trained ‘cellist, a singer, and multi-instrumentalist. His “Griot” project was twice in the top 3 of Amazon’s “Best Selling Contemporary R ’n’ B Chart. Menchan’s unique sound and approach to music-making is due largely to his having worked, and become friends, with some of the world’s greatest old school ‘cellists, including Harvey Shapiro, Janos Starker, Olga Rostropovich and Laszlo Varga. Menchan has concertized around the globe and his arrangements and original compositions have been premiered at Houston’s Museum of Modern Art, DiverseWorks Artspace, and the Verizon Center, and the Toledo Museum of Art. As a studio musician, he has collaborated with Hip Hop super-producer Mike Dean, Bill Evans Trio former Drummer Marty Morell, and the late guitarist Ed Vitale, who played with Dizzy Gillespie and Charlie Parker. Having served as solo ‘cellist of numerous ensembles, including Houston’s OrchestraX, The New York Pro Arte Ensemble, and the Orlando Symphony, he Menchan is a bass artist for NS Design, maker of some of the most innovative and sought after basses in current production. He has been hailed as “an ubercellist” (Inside Houston Magazine), a creative for whom “anything is possible” (Ink19 Magazine) and one who creates works with a “ technical precision and sense of honesty that is hard to match in the music scene today.” (Jazzcorner.com) His highly anticipated follow-up to his first album is on schedule to be released in the Fall of 2020, and an exciting bevy of artists is being assembled, even now, for his 3rd album.